Cultural mobilization in the COVID-19 pandemic 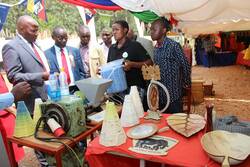 “ UN-Habitat has trained me and my group members on basic plastic waste recycling skills. Together with my colleagues, we have obtained reasonable revenue by selling recycled plastic products, such as flower vases and lamp shades, at trade fairs, exhibitions and agricultural shows in various parts of the country.”