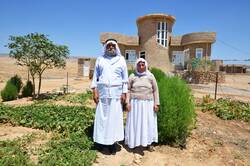 Wael Al-Ashhab
Head of Iraq Country Programme
+ Partner with us

UN-Habitat seeks to provide up to date, holistic documentation and analysis of the impact of the crisis in key cities, through City Profiles, synthesising information and insight from existing sources and priority sectors, supplemented by direct field research by UN-Habitat teams based in each city…

UN-Habitat Iraq September Newsletter: Provides an update on UN-Habitat’s activities in Iraq as well as relevant policy and advocacy topics.

UN-Habitat Iraq December Newsletter: Provides an update on UN-Habitat’s activities in Iraq as well as relevant policy and advocacy topics.

UN-Habitat Iraq June Newsletter: Provides an update on UN-Habitat’s activities in Iraq as well as relevant policy and advocacy topics.