Impact
Over 31,000 families supported to reconstruct their conflict damaged houses in the North and East of Sri Lanka.
420,000 people benefitted from improved community infrastructure facilities (e.g. internal access roads, community wells, stormwater drainage systems) in the conflict-affected North and East.
Eight cities were supported to develop disaster risk reduction plans and thereby minimize impacts to residents from natural disasters.
Urban numbers
Less than 30 per cent of households across the Provincial Capitals report a piped sewerage connection, instead relying on vulnerable on-site disposal methods.
In 2018 Sri Lanka was identified as the second most vulnerable country to climate change related disasters. The most severe consequences are landslides, floods and associated disease outbreaks.
Urban sprawl is ia key planning challenge for the Government of Sri Lanka, with negative impacts ranging from the cost of public services to environmental sustainability.
+ UN-Habitat Sri-Lanka
Image 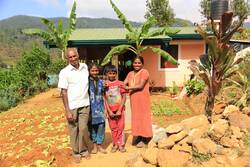 “Now, our children have space to study and can do their school work in comfort. Earlier the house was cramped and there was not enough space for all the family members. We are so happy to have our very own permanent house.”

Tools and Methodologies for Safer Schools and Hospitals in South Asia: RetroMaintenance of Hospitals

+ DOWNLOAD
Tools and Methodologies for Safer Schools and Hospitals in South Asia: RetroMaintenance of Hospitals + Download the response plan + View the COVID-19 Appeal + Join us

Community Spirit: Rebuilding Community Infrastructure in the North and East of Sri Lanka

Turning Around the Tsunami

This report looks closely at the three main elements that made the programme a success – the participation of people from the inception to the end, the diverse partnerships – donors, government, community based organizations that brought people together to implement the projects and the new and…

The evaluation assessed the performance of the Slum Upgrading Facility (SUF) and its associated projects in the four pilot countries: Ghana,Indonesia, Sri Lanka and Tanzania.

In Sri Lanka, UN-Habitat adopts a rights based approach in the implementation of its programmes, particularly in ensuring the rights to housing, land and property of vulnerable communities including female headed households, IDP and refugee returnees, plantation workers, disaster affected communities and communities in informal settlements.

Women in the North and East empowered through increased access to and control over finances, land tenure, housing, property, food and environmental resources.

Prioritised the selection of female headed households for housing support and the inclusion of women in leadership roles in Village Reconstruction Committees in the North and East of Sri Lanka.

Improved the learning environment through the construction of classroom buildings, teachers’ quarters and WASH facilities in 25 schools in Mannar district benefitting over 6,800 schools children.

All public buildings constructed under UN-Habitat programmes include accessibility features for persons with disabilities, while local builders and communities are made aware of inclusive environments for the People With Disabilities (PWDs) and accessibility measures.

A positive bias was maintained in all programmes to prioritise PWDs for housing and other assistance.