Impact
National government agencies and local governments with strengthened capacities for resilient and sustainable urban plans and designs.
Disaster-affected families who rebuilt their homes and communities with secure tenure.
National government agencies and local governments developed capacities to promote effective settlements growth through planned city extensions.
Urban numbers
Level of urbanization grew from 45.3 percent in 2010 to 51.2 percent in 2015. Level of urbanisation grew from 45.3 per cent in 2010 to 51.2 percent in 2015.
National housing backlog of 6.38 million units with 3.62M informal settler families (ISFs).
The Philippines is one of the most disaster prone countries in the world. Annually, an average of 22 tropical cyclones enters the Philippine Area of Responsibility of which around 6 to 7 cause damage. 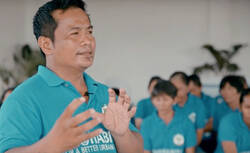 “Usually, only the rich have construction plans. But here [with the Post-Yolanda Support for Safer Homes and Settlements], every household has a construction plan. And we all learned how to read and use these plans. UN-Habitat conducted DRR seminars to train us to be disaster-resilient. So now, whatever happens, we are more prepared.”

This publication documents and draws lessons from the Philippines' experience in implementing alternative approaches in securing tenure for the urban poor. It also explores how these approaches can be institutionalized and ensure sustainability.

Addressing Systemic Barriers for Achieving Sustainable Urbanization in Emerging Economies: Learnings from the 19 Cities of the Global Future Cities Programme

Through a comparative analysis of the 19 cities of the Global Future Cities Programme, the report shares experiences and knowledge gained during the Programme’s Strategic Development Phase. It identifies common urban trends in urban planning, mobility, resilience and data, as well as underlying…

Water Operators' Partnerships (WOPs) are peer support relationships between two or more water or sanitation operators, carried out on a not-for-profit basis in the objective of capacity development.

This report examines the fiscal decentralisation experience in Philippines. Since 1991, the central government has devolved significant spending, taxing, and borrowing powers to local governments.

Fiscal Decentralization in the Philippines

Part of the Global Urban Economic Dialogue Series, this publication determines to what extent fiscal decentralization has empowered local government units in the Philippines to efficiently discharge the greater responsibility for governance, public service delivery, and local development.