Urban numbers
Less than 30 per cent of households across the Provincial Capitals report a piped sewerage connection, instead relying on vulnerable on-site disposal methods.
In 2018 Sri Lanka was identified as the second most vulnerable country to climate change related disasters. The most severe consequences are landslides, floods and associated disease outbreaks.
Urban sprawl is ia key planning challenge for the Government of Sri Lanka, with negative impacts ranging from the cost of public services to environmental sustainability. 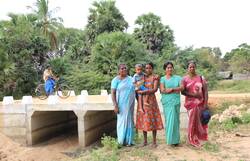 Tools for the assessment of school and hospital safety for multi-hazards in South Asia: RetroMaintenance of schools

+ DOWNLOAD
Tools for the assessment of school and hospital safety for multi-hazards in South Asia: RetroMaintenance of schools + Download the response plan + View the COVID-19 Appeal + Join us

This evaluation covers the activities of the Project ‘Strengthening National Capacities to Formulate and Adopt Housing and Slum Upgrading Strategies’.

In Sri Lanka today, as in many other developing countries, there is a growing urgency to come up with creative and sustainable solutions to tackle the twin pressures of infrastructure needs and the interests of communities who are affected by such projects, often losing their homes, land and...

Tools and Methodologies for Safer Schools and Hospitals in South Asia: RetroMaintenance of Hospitals