UN-Habitat has been supporting the People and the Government of the Union of Myanmar since the early 1990s through operational and normative projects. UN-Habitat’s key thematic areas of engagements range from Advocating on policy and strategy development, Urban Planning and Management, Land Administration and Management, Improving human settlements and Rebuilding communities, Urban Research and Poverty Reduction, Disaster risk management and Environment, Building Resilience and Climate Change.

Due to the recent economic and political liberalization in Myanmar, the rate of urbanization majorly in the two urban agglomerations Yangon and Mandalay are expected to increase from 15.4 million (30% of the total population) in 2014 to 18.8 million to 2030. This poses economic and spatial development challenges such as solid waste management, informal settlements sprawling, traffic management that stand at a crucial period and negligence on this aspect of Urban Development can increase and worsen the challenges of urbanization for the future.

These challenges include, the rapid growth of a number of informal settlements due to the prolonged undersupply of housing, loosely bound urban legislation and administrative framework, need for improved land management, improper management, and provision of municipal services, intensified environment, and climate change issues.

In order to answer these challenges of urbanization and to capitalize on its opportunities, UN-Habitat assists and engages with a range of ministries to support Myanmar in overcoming and planning for a sustainable and inclusive future for all through urban policy and planning that reaches beyond the traditional city- scale.

34% of Yangon’s population of 5.2 million are living below the poverty line.

In Yangon, 423 informal settlements with a total estimated population of 365,000 or 6-8% of the city’s total population. 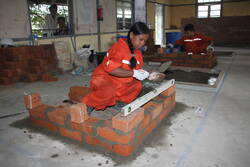 “I had always learnt from masons working around me in construction sites. I had never had proper training and so I could not do practical work. Now I feel proud to be able to work through gaining the theoretical and practical knowledge from the masons training programme and because of this my income has also increased by double! Apart from this I now also have understanding of the importance of safety at the construction sites.
I would like to encourage other women who engage in construction sites as a general worker to take one step ahead to upgrade their lives and careers. As human being, we can work the same as men if only we have confidence in ourselves.”

UN-Habitat is providing technical assistance on issues related to the Habitat Agenda to its partners in Myanmar including the Ministry of Construction, Ministry of Social Welfare, Relief and Resettlement, Ministry of Agriculture, Livestock and Irrigation, Ministry of Natural Resources and Environmental Conservation. Reports are presented to line Ministries and Departments on monthly basis, and attendance to meetings at General Administrative Department Offices, both at township and regional level. Myanmar is Better Equipped to Address Climate Change, Including in Cities

On 5th June 2017 at the World Environment Day celebrated in the Myanmar capital city Nay Pyi Taw, H.E. the President of the Union of the Republic of Myanmar, U Htin Kyaw, addressing a large audience of ministers, ambassadors and development partner representatives, stated that “climate change is a…

+ DOWNLOAD
Myanmar is Better Equipped to Address Climate Change, Including in Cities + Download the response plan + View the COVID-19 Appeal + Join us This research aims at informing development initiatives that responds to capacity gaps and requirements of stakeholder sectors in Myanmar in relation to mitigation and management of risks relevant to climate variability and change. The research concentrates on Dagon Seikan Hpa-An, Keng Tung, Kyauk… This photo book showcases the project implementation in 221 villages across six townships of Dry Zone (Yesagyo, Pakokku, Myingyan, Natogyi, Mahlaing and Taungtha) whereof over 178,167 people benefitted. A short step from improved WASH to healthier communities aimed at providing communities with… The overall aim of the training course is to build the capacity of national and local governments for integrating CCA and DRR measures into local development plans. The course modules are tailored to equip government officials with robust knowledge on climate change and its impacts in Myanmar, as… White Papers are policy documents that outline the government’s proposals for future governmental activities with regard to legal and regulatory frameworks governing a certain functional sector. A White Paper provides a basis for further consultation and discussion with interested or affected…