UN-Habitat is a strategic partner of the Government of the Islamic Republic of Afghanistan in promoting sustainable urban development. Since 1992, UN-Habitat has worked closely with the government, municipal and local authorities, especially Afghan communities, contributing to the physical and social reconstruction of the country. Our work has focused on assisting the government in the development of urban policies and regulations; strategic urban planning; increasing municipal revenue; establishing community-based organizations; addressing the land and housing needs of IDPs and returnees and contributing to the provision of basic urban services.

Informality is not the exception but the rule. 80 % of urban Afghans live in informal areas. The vast majority of the population live in under-serviced, informal housing with little tenure security and very poor access to basic services such as water and sanitation.

However, Afghanistan’s future is urban. The population of Afghan cities is expected to double within the next 15 years and be 50% urban by 2060 and urbanization is a powerful driver for development. So far, more than 50% of the national GDP is originated in Afghan cities.

Urban numbers
The urban population annual growth rate is 3.41%
The percentage of the total population that is urban is 25.25%
+ UN-Habitat Afghanistan
Imagem 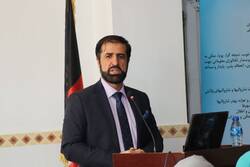 “UN-Habitat is not only a partner but strategic partner for us in Afghanistan, working together in the physical and social reconstruction of my country, supporting the provision of urban services to our citizens.”

Afghanistan's future is urban. The population of Afghan cities is expected to double within the next 15 years and by 2060, one in every two Afghans will be living in cities. In order to manage such a transition and harness it for economic and social development accurate data and information is…

The “Atlas of Afghan City Regions 2016” is a seminal publication on the spatial and governance data covering five major city regions, which are, Kabul, Kandahar, Herat, Jalalabad and Mazar-i-Sharif, and 28 strategic district municipalities.

The Silent Revolution of Public Spaces in Afghanistan (Koussay Boulaich, Ahsan Saadat, Suhail Mayel) is the untold story of hope and peace in urban areas. The provision of public spaces in cities across Afghanistan is shaping the lives of the citizens, especially women and the poor, and the…

Human rights are at the heart of UN-Habitat’s work in Afghanistan through all our projects in the field. In addition, UN-Habitat Afghanistan co-chairs the Housing, Land, and Property Rights Taskforce (HLP-TF). The aim of the task force is to increase access to land, tenure security, and housing as an essential component of humanitarian response and durable solutions.

UN-Habitat programmes opened the door to a greater role of women in decision making processes through a number of programmes and initiatives. In property rights and the acquisition of occupancy certificates, women have now the right to possess an occupancy certificate under their name. Women are also an integral part of participatory processes in strategic action planning initiatives at the community level in Kabul and 8 other municipalities. A key achievement in this area has been the official representation of women in the establishment of Community Development Councils, sub-national governance structures. These bodies should be composed of at least 50 percent of women.

The success of UN-Habitat is dependent on the strategic and trustful relationships with the government, at the national and local level, and with the communities. With more than twenty years of impactful interventions, UN-Habitat has managed to meet the government and community needs due to the strong partnerships always driven and led by our local partners. Local ownership has always been at the center of our interventions.