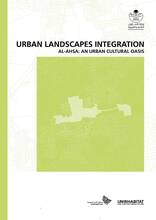 Share
0
الرؤى
95
Downloads
406
Likes
The Future Saudi Cities Programme is a joint programme developed by the Saudi Ministry of Municipal and Rural Affairs and UN-Habitat, implemented in close cooperation with the municipalities of 17 major Saudi cities, the cities have been selected based on their different population sizes, geographic distribution, and a range of criteria based on capacities and economic potential to create a more balanced regional development among the cities of Saudi Arabia. The chosen cities include Riyadh, Makkah, Jeddah, Taif, Madinah, Tabuk,Dammam, Qatif, Al-Ahsa, Abha, Najran, Jazan, Hael, Arar, AlBaha, Buraidah, and Skaka. one of FSCP outcomes is the three demonstration projects for three cities (-Al-Ahsa, Arar and Buraidah). UN-Habitat’s three-pronged approach considers spatial planning in relation to legal and institutional frameworks, in addition to financial mechanisms. In this way, success criteria for the sustainable implementation of a spatial plan should include flexible but enforceable rules and regulations, in addition to a financing strategy and projections. As a pragmatic explication of this approach, three local demonstration projects representing essential elements of a strengthened and improved planning system have been developed. As applicable to all of these projects, the demonstration project for Al Ahsa  has been elaborated to include schematic designs and feasibility studies, that can later be transformed into implementation plans. Such implementation plans are projected to be undertaken by the Ministry of Municipal and Rural Affairs (MoMRA), in collaboration with other partners in the Kingdom. Though this project is localised in order to provide a detailed and calculated projection of impact, it has been designed to address problems that have been analysed as paradigmatic of Saudi cities, and the themes and elemental compositions presented here, are considered as transposable in the larger Saudi context.