The territorial dimension of displacement in northern Mozambique 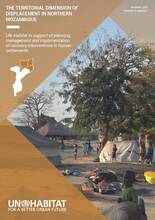 In Mozambique, around 700,000 people have fled mainly to urban centres, due to the armed conflict which started in 2017 in the Northern Region, in Cabo Delgado Province, most of them during the last year, as instability increases.

The conflict and its induced massive displacements, combined with the effects of previous disasters and the high socio-economic vulnerability, are having profound impacts on land use and tenure in recipient urban settlements (bigger towns such as Pemba have already a significant 30% increase in size in few months), leaving local authorities unprepared, resulting in lack of access to basic services to all (water, sanitation, waste management, schools, health centres, electricity, etc.), unsustainable use of natural resources (e.g. deforestation, leading to land degradation), among other aspects. In addition, the IDPs housing situation is inadequate, and their food security is in danger.

In support of planning, management, and implementation of actions to address recovery needs and urban durable solutions, UN-Habitat has developed the position paper « The territorial dimension of displacement in northern Mozambique » that aims to advocate for the promotion and joint implementation of integrated urban interventions improving the living conditions of host communities and IDPs, as well as supporting a local governance mechanism to drive sustainable urban development.