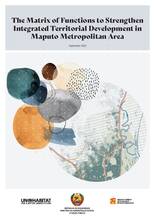 The Spatial Development Framework (SDF) is a participatory regional spatial planning method to support national, regional and local government decision-making processes on where to prioritize investments. The methodology combines three main spatial planning tools that can be easily adapt to the specific context in which it is being used.

This report aims to present the results of the main SDF tool, the Matrix of Functions (MoF), which serve as a pilot for adapting this methodology to the Mozambican context and more specifically to the context of urban metropolitan areas. Moreover, it provides the basis for the definition of a work plan for a study that includes the whole country to support policies related to urbanization and national transformation., such as the forthcoming implementation of a National Urban Policy.

The Matrix of Function in this case has been implemented in Maputo Metropolitan Area. Formed by four cities, namely Maputo, Matola, Boane and Marracuene.

Cooperation between districts and administrative posts within the Metropolitan Area appears then to be crucial towards coordinated implementation of interventions. This would avoid the overlapping of development projects proposals or a disproportional concentration of interventions in some areas, which would lead to districts competing among themselves and more unbalanced territorial developments.