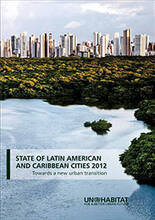 With 80% of its population living in cities, Latin America and the Caribbean is the most urbanized region on the planet. Located here are some of the largest and best-known cities, like Mexico City, São Paulo, Buenos Aires, Rio de Janeiro, Bogota, Lima and Santiago. The region also boasts hundreds of smaller cities that stand out because of their dynamism and creativity. This edition of State of Latin American and Caribbean cities presents the current situation of the region's urban world, including the demographic, economic, social, environmental, urban and institutional conditions in which cities are developing. Also available in Spanish Version.