Evaluate and analyze the legislative and institutional current situation of Saudi Cities and their capability to execute urban policies and strategies in the Kingdom. setting detailed strategic profiles and pilot projects as road map. Engage with communities in the planning system especially women and youth and establishing platforms for engagement in city planning.

The Future Saudi Cities Programme, a joint programme developed by the Saudi Ministry of Municipal and Rural Affairs (MoMRA) and UN-Habitat, implemented in close cooperation with the municipalities of 17 major Saudi cities. The cities have been selected based on their different population sizes, geographic distribution, and a range of criteria based on capacities and economic potential to create a more balanced regional development among the cities of Saudi Arabia. The chosen cities include Riyadh, Makkah, Jeddah, Taif, Madinah, Tabuk, Dammam, Qatif, Al-Ahsa, Abha, Najran, Jazan, Hael, Arar, Al Baha, Buraidah, and Skaka.

Horizontal expansion of the 286 Saudi Cities with increasing cost of the Infrastructure. Physical area of Cities expanding faster than populations.  High pollution and energy consumption in addition to more than 92% of the populations dependence on private transportation has caused incline of annual temperature and urban heat islands in most of Saudi cities. Waste production from than 33 million inhabitants is generating more than 15 million ton of waste annually most of which are sent to landfills. Primacy of big cities economy on the overall GDP of KSA where Riyadh and Makkah regions contributes to more than 50 % of the total GDP of the country excluding crude oil.

Urban numbers
92 per cent of the populations dependence on private transportation.
The legal urban legal system is composed of more than 600 by law, royal decree, ministerial decree, etc.
32 per cent of the cities are accessible and linked to public transport systems.
图像 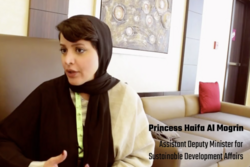 UN-Habitat’s three-pronged approach considers spatial planning in relation to legal and institutional frameworks, in addition to financial mechanisms. The demonstration project for Arar has been elaborated to include schematic designs and feasibility studies, that can later be transformed into…

Under the FSCP, UN-HABITAT, MOMRA, Madina Municipality and its Local Urban Observatory has been working on developing urban statistic and spatial information (Geographic Information System) to provide relevant urban information that strongly supports decision-making process on urban development and…

Human Rights was mostly focused on the institutionalization of engagement in the process of planning and transparency in information dissemination, awareness raising and building the capacity of municipal government in many areas of planning reforms.

A joint study was conducted between the Ministry of Municipal and Rural Affairs in Saudi Arabia and UN-HABITAT to evaluate the state and status of women and youth in Saudi cities and provide guidance for additional research to develop concrete and actionable policy solutions.

City Prosperity Index was prepared focused on youth needs and aspiration for the 17 cities of the FSCP. Mapping of good practices from different cities for engaging citizens especially the youth in area of informal settlements upgrading or public space management or participatory planning in general. Training of young men and women on using Mine-craft in urban planning. The overall objective of the training is to enhance the ability of young people of both gender to engage in urban development, educate local and national authorities on involving youth in issues related to future planning for the cities.  Children focus was also focused on through using the Mine craft and applying it to one public open space  with Riyadh School to set an image for how children see their public open space.

Two Competitions for public open space was done. The first wad between architectural and planning students from 11 Saudi Universities as part of the “ I am City Changer campaign”. The 2nd was a competition between Saudi youth on the parklet. Both competitions were focused on people with disabilities amongst other aspects.

The success of our work in Saudi Arabia is dependent on successful partnerships with Ministry of Municipal and Rural Affairs. During the consolations with the UN-HABITAT advisers it has been agreed to launch a comprehensive program to address urban challenges that the Saudi cities face, and contribute to their prosperity as per the recent global trends for management of urban cities, and setting of a strategy and modern planning vision for Saudi cities and to develop the idea and the study, besides the possibility of its implementation in the Kingdom of Saudi Arabia within the forum events.

UN-Habitat has been involved as well with Public Investment Fund in urban regeneration of central Riyadh City. The collaboration was focused on how to build an engagement plan for citizens and expatriates in the urban regeneration area.

The partnership with the ministry of Housing is another initiative focused on support to the role of the NGOs and cooperatives system in the country in order to match housing demands by several target groups not reachable through private sector housing provision mechanisms.