The flagship programme employs urban regeneration as a tool to reduce spatial inequalities and poverty. Supporting the social, economic, and environmental transformation of deprived areas and strategic locations within a city will result in connected, dynamic, diverse and vibrant neighborhoods. This transformation of urban areas is expected to lead to an increase in equality of outcomes for all. In 75% of cities, people have less access to basic services compared to two decades ago.

Gentrification processes in cities negatively affect access to (economic) opportunities for the most vulnerable.

Many urban residents do not have convenient access to open public spaces and public transportation.

Every city has low density, obsolete or badly planned areas which do not function adequately.

The flagship programme "Inclusive, vibrant neighbourhoods and communities" employs urban regeneration as a tool to reduce spatial inequalities and poverty. The programme will support the social, economic, and environmental transformation of deprived areas within a city. This transformation of urban areas will result in connected, dynamic, diverse and vibrant neighbourhoods and communities and increase the equality of outcomes for all.

3. What have we achieved so far

In 2015, UN-Habitat partnered with the Nairobi City County Government, the Dandora Transformation League and Making Cities Together Coalition to upgrade a model street in Dandora as a way of showcasing the process of co-creating public spaces. The project brought together over 500 stakeholders who agreed on a common vision for the neighbourhood.

Initiatives undertaken collectively with residents of Dandora included cleaning up and landscaping open spaces, clearing storm drainages, painting building facades and organizing residents to manage their own security. Trees were planted, 800m of roadway paved, waste bins installed, and gateways constructed. The result was a model street project with potential to accelerate positive socio-spatial transformation of the area through replication. The partnership rebranded the neighbourhood as a cohesive, safe and green haven.

The neighbourhood was revitalised by the community’s decision to take charge of the quality of their open public spaces and is a model of regeneration for the city. The initiative has been the catalyst for city-wide neighbourhood competitions for similar place-making initiatives. 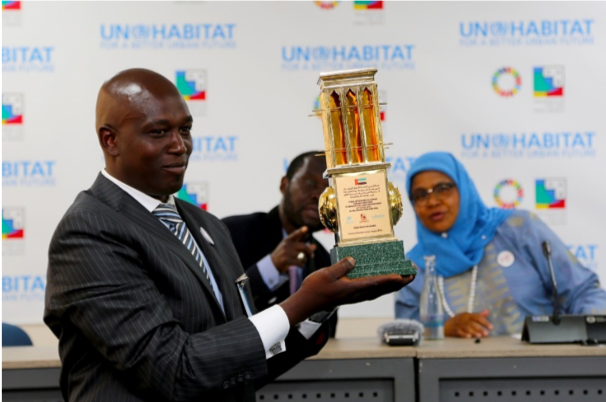 "Sometimes back, M-pesa and other businesses that make a fair amount of money would be closed by 7.00 pm due to fear of attacks. Today however, these and many other small businesses operate until 11 o’clock in the night - Charles Gachanga, a local champion and the CEO of Dandora Transformation league"

Outcomes of the Dandora community-led neighbourhood regeneration initiative include improved safety and security, stronger social cohesion, better recreation facilities for children, and better livelihood opportunities.  Environmental health in the neighbourhood has improved with better drainage and social capital has been generated with support for culture and the arts. The initiative has also resulted in improved governance and better relationships between the youth and local authorities, enhancing overall quality of life for all.

In 2016, UN-Habitat partnered with the Chengdu Planning Institute and Chengdu municipality to transform three pilot streets in Shaocheng district, in central Chengdu, to kick-start the regeneration of the historic district, and as a way to showcase the process of organic urban renewal to strengthen the conservation and development of historic and cultural communities through comprehensive planning, design and monitoring with creative urban renewal principles.

Led by the municipality, the process brought together local residents, business owners and vendors, and cultural actors in the neighbourhood. It focused on improving the quality of public space, integrating community voices through public participation, protecting locals through policies that mitigate the negative impacts of gentrification and developing a new governance model that promotes horizontal co-ordination among the departments in the municipality.

Physical upgrading interventions carried out through the pedestrianization initiative included widening of sidewalks, reorganization of on-street parking and bike lanes, introduction of seating opportunities and painting of building facades. The quality of the residential buildings was improved, and courtyards were cleaned up and landscaped. The result was a transformed pilot street with potential for upscaling across the neighbourhood and replication across other Chinese cities. The governance model has become an exemplar for inclusive urban regeneration in the city, inspiring community involvement in the regeneration of their neighbourhoods.

"There are more tourists coming to our neighbourhood now, and my snack bar business has doubled than before. - Uncle Wang, a local vendor."

Outcomes of the street transformation include improved air quality, improved urban safety and security, improved living conditions for local residents, renewed local pride and a sense of ownership. Road safety has also improved thanks to reorganization of the street space. The initiative has also resulted in improved capacity of the municipality to carry out meaningful public participation and integrate community voices in the planning processes.

Ishmael Lamptey likes to guide visitors through Jamestown. His neighbourhood is part of the famous Old Town of Accra, the capital of Ghana. He leads them through cleanly paved, narrow alleys, between low rows of houses. He stops in an open square and points to the pavement that connects almost all of Jamestown's sidewalks. 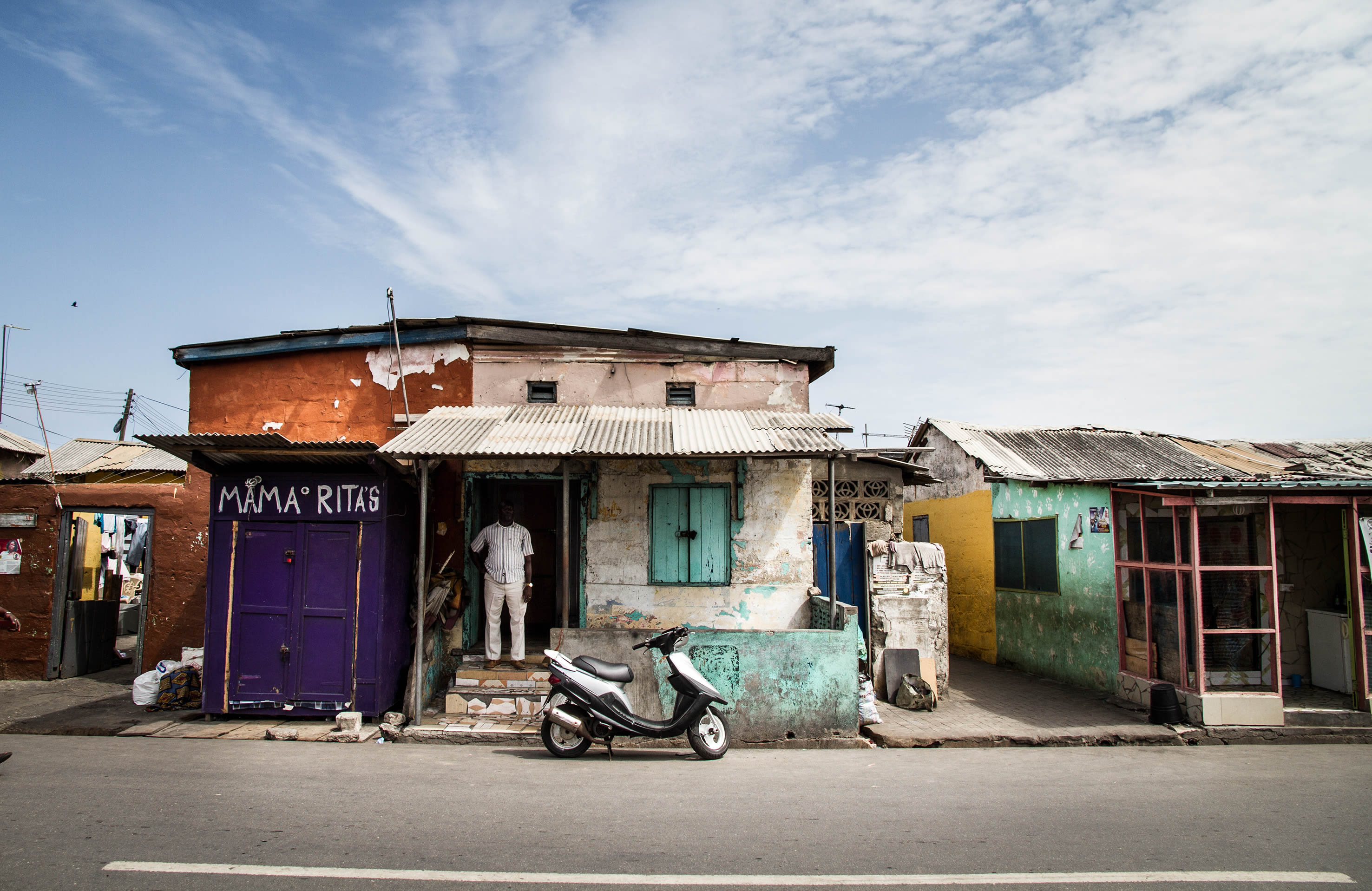 "We moved all this here over a year, stone by stone, in painstakingly detailed work. It's unimaginable what this place looked like before. The paths were full of potholes. - Ishmael Lamptey, community member involved in the neighbourhoods' regeneration."

In the dry season everything was dusty, when it rained people sank ankle-deep into the mud. The stinking sludge had even run all the way into the houses.

The newly paved streets and sidewalks are part of a large-scale rehabilitation project that UN-Habitat is carrying out together with the Ghanaian government. In 2008, the Participatory Slum Upgrading Programme (PSUP) of UN-Habitat, together with its partners, the African, Caribbean and Pacific Group of States (ACP) Secretariat, and the European Commission, initiated a whole series of changes in Jamestown and the adjacent slum district Usshertown in the heart of the famous old town of Accra, Ga-Mashie.

Gabriel Nii Teiko Tagoe, Chief Development Planning Officer of the Accra Metropolitan Authority (AMA), is coordinating the initiative for PSUP on site. "Ga-Mashie, the oldest district of Accra, was once in its heyday and one of the most beautiful spots at the former Gold Coast of Africa," says the urban planner. "However, since Ghana’s independence in 1957, this area has not seen any kind of intervention". Historic buildings, such as the Ussher Fort and James Fort fortresses, built in the 17th century and UNESCO World Heritage, were visibly deteriorating. The Old Town grew rapidly in size and population during the 20th century. The area was eventually abandoned and turned into a slum.  "But as the growing number of arts and culture in the area continued to attract visitors attention, including private sector interests, it became clear that something had to be done".

Together with the local community, his team and the PSUP team looked at what Ga-Mashie needed the most: accessible paved roads, sewerage networks and improved sanitation were favoured by the residents. "Community Managed Funds were established in both neighbourhoods to be availed to community groups to take on specific tasks in the upgrading of the settlement as a way of creating employment and enhancing skills", Tagoe says. For example, the community has hired young men like Ishmael Lamptey from the neighbourhood to pave the streets together with commissioned experts. Old Accra now has several public toilets and shower houses; 50 private toilets; as well as a municipal waste management system connected to the public waste disposal. The community runs all the facilities in the frame of the Community Managed Funds and generates an income.

Ishmael Lamptey has learned a lot through his year in road construction. He now works as a craftsman and is hired when construction work is required in the community. As part of the Community Managed Funds, he continues to be involved in his youth group and wants to train other young men in the construction business in the future.

Gabriel Nii Teiko Tagoe also has plans. "Ga-Mashie has a tremendous potential for regeneration," he says. Public space has created a lively atmosphere in the streets. People opened businesses on the roadside, and there is a growing art and culture interest. The city administration wants to maintain this and plans, with the support of UN-Habitat and UNESCO, to renovate the dilapidated historic buildings and create better living spaces for the residents. Then, according to Tagoe, this part of the former Gold Coast could once again attract tourists and open up entirely new opportunities in the streets of Old Accra.

In 2016, UN-Habitat partnered with the Government of Afghanistan with support from USAID and the European Union to implement the Clean Green Cities programme in twelve strategic cities in Afghanistan as a way to stabilise the country and specifically improve state-society relations, stabilise the cities and regions and create jobs. The project brought together over twenty thousand five-hundred people including youth, women and children together to shape their cities and re-write their story. As part of their contribution, residents of informal areas contributed financially to projects as a sign of trust and gratitude to their municipalities for upgrading their neighborhoods.

Initiatives undertaken collectively with the people across the cities included cleaning up, constructing new parks and improving existing ones, beautification, repair, clearing storm water drainages, painting building facades, installing murals on T- walls. Trees were planted, forty-nine parks were built and more than 2,259 m2 of staircase footpaths were constructed to connect the hilly area of the city, inaccessible to older people, people with disabilities and children.

"We have witnessed how this park has changed the lives of our people and neighborhood, from a dumping site to a green area. We stop by this park on our way to the mosque for our prayers several times a day. (Sayed Jamal, Afghan Par, Community leaders of District 9 of Mazar-e-Sharif )"

Outcomes of the intervention include closer ties between the Afghan people, their cities and institutions, creation of job opportunities for locals including women and youth, improved wellbeing of citizens, improved environmental quality, improved trust between citizens and municipalities and increased private sector confidence and investment for jobs creation.