HA NOI, 14 January 2015 — Tam Ky and Quy Nhon will be the first cities included in the Viet Nam City Development Strategies Project (CDS), officials announced on Tuesday. The CDS project aims to create city-development strategies that involve all stakeholders, using the cities themselves as the driving force behind development. "Cities contributed up to 75 per cent of the country's GDP and created millions of jobs, serving as economic hubs to boost development," said Do Viet Chien, director of the Ministry of Construction's Urban Development Agency.

Speaking at the workshop “Support for community-based participatory city development strategies in seven Vietnam cities", Chien added that Viet Nam had started to experience unwanted results of unplanned development in cities across the country, such as waste and inefficiency. City development, even when planned, could still backfire if un-coordinated and lacking strategic vision, said Dinh Thanh Tam, director of the Ministry of Planning and Investment's Department of Planning Management. "The country's development plans are often poorly constructed and lack community support," Tam said.

In addition, these plans complicated the development process instead of helping it and caused substantial damage to the environment in the process, according to the director general. "With one-third of the population and major economic and social activities taking place every day, the country needs a model to guide the development of its cities now more than ever," said Nguyen Quang, UN-Habitat Programme Manager in Viet Nam.

Quang said that CDS, a tried and tested model for city development, would be a useful tool for policy-makers and businesses in dealing with the emerging issues faced by fast-growing cities across the country, such as climate change, energy preservation and the development of competitive advantages. D. Ajay Suri, Regional Adviser of the Cities Alliance, said the CDS project was different from other models as it focused on ways to get the community involved, not just during the planning stage but also during the implementation process.

The workshop included a presentation on Tam Ky's use of the CDS model to come up with a strategic development plan for an environmentally friendly city and sustainable growth. Chairman of Tam Ky People's Committee Van Anh Tuan said the city would focus on products and services that were complementary to those of other cities and provinces in the region such as tourism, agriculture-forestry and fisheries while investing in human resource development as part of a long-term strategy for sustainable development.

The project will cover five more cities over two years (Hai Duong, Hung Yen, Viet Tri, Ha Tinh and Ben Tre) with sponsorship from the UN-Habitat and Cities Alliance, a global partnership for urban poverty reduction and the promotion of the role of cities in sustainable development. Read more on Planning and Design. 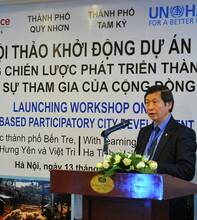