Erbil, 11 May 2016 -- The progress achieved under the project Establishing a Building Control Regime for the Kurdistan Region of Iraq (KR-I), funded by the United Nations Development Programme (UNDP) and implemented by the United Nations Human Settlements Programme (UN-Habitat), was discussed in a ministerial meeting held in Ebril late last month. Minister of Planning Mr. Ali Sindi, the Minister for Municipalities and Tourism Mr. Newroz Mawlood Amin and their Housing and Construction counterpart Mr. Darbaz Kosrat Rasul as well as the Governor of Erbil attended the meeting.

In his speech Mr. Sindi, said: “I firmly believe that this project exhibits one of the best examples of successful partnership of the United Nations and the Kurdistan Regional Government. I would like to express my sincere appreciation and gratitude to the project team of UNDP and UN-Habitat for the tremendous efforts exerted into this project. I hope that the outcomes are another step towards further reform of the building system.” Over the period of December 2014 to March 2016, and at the request of the Ministry of Planning, UNDP and UN-Habitat joined efforts with the Kurdistan Council of Ministers and government counterparts to support the development of an effective, efficient and locally adapted building control regime in order to improve the investment environment and contribute to sustainable development.

UNDP Acting Country Director, Mr. Sultan Hajiyev, noted: “With the strong commitment of the Kurdistan Region authorities, construction practices have been revisited, modernized and aligned with international standards to reflect health, safety and environmental protection measures in an efficient and cost effective manner.” Head of UN-Habitat Iraq, Mr. Erfan Ali, underscored “the principle outputs in this phase which included the outlines of a new building regulation, six building codes, in addition to comprehensive analysis on building permits procedures.” He added: “No doubt, these efforts represent substantial contribution in the reform of urban development sector in KR-I." Participants in the meeting also discussed the way forward, including the update of a comprehensive set of new building codes, finalization of the building regulation, and developing the capacity of respective institutions on the application of the building regulation and the updated building codes. 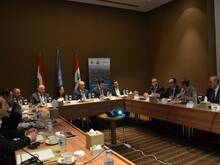