Giving the reason behind this unique project, UN-Habitat’s head of Bunia Office Mamadou Diallo explains: “The challenges related to the access of indigenous peoples to land and the issue of their settlement in the province of Ituri in general and in the territory of Mambasa in particular were raised in the various meetings held by the actors involved in the project and members of local communities, particularly in the framework of democratic dialogues, the mini-round table and workshops.”

The overall objective of this project was to promote rights of access to land for vulnerable populations, indigenous people and women heads of household. Further, it had these specific objectives- responding to the need expressed daily by indigenous peoples who have difficulty accessing habitable places and promoting their integration into the lifestyles of other communities; delineating and demarcating land with land administration and providing written records of new land allocated to beneficiaries as well as ensuring that women's access rights to land are taken into account.

Diallo explains:, ”In response, beginning November 2015, UN-Habitat started conducting advocacy for the granting of land to the customary authorities of the Babila Bakwanza chieftainship, Bapwele and Bakwanza groups, in favor of this category of extreme vulnerabilities. At the end of these proceedings, three land surrender certificates were signed by these customary authorities, indicating the beginning of the securing of land.

The good collaboration between UN-Habitat and local authorities allowed joint UN-Habitat, the NGO CFI and Local Authorities that run Kulue, Mabukulu and Andikwakwa to carry out the technical work in these sites granted to pygmies.”

Salvatore Safari who was the lead in this project says that the Wambuti were at a clear disadvantage. “The pygmies have throughout the years been living at the mercy of their more powerful Bantu neighbours. At times when land has exchanged hands between the Bantus, the pygmies also find themselves having new masters in the new landowners.

It is after this juncture that we sourced for funds and in the initial stage we settled some 36 families in a 100 acre piece we managed to acquire. The second parcel of 100 acres saw 25 pygmy families being settled and some part set aside for farming and lastly the third piece had 30 families move in and they also have some acres set aside for farming.”

Both Diallo and Safari are upbeat that the project was a huge success. To ensure fidelity, the transaction to the land was done in a traditional manner with livestock exchanging hands.

Two major behavioural change issues have also been addressed in this project- the Wambuti are normally nomadic wandering in serahc of livelihood. However, the project wants them to settle and slowly they are adapting to agriculture and animal keeping.

“The other issue was the place of women in the Wambuti culture where they were mostly used to work for other people. We are now encouraging them to till their own land and also give them a say on matters affecting their communities,” explains Diallo.

The second phase of the project is coming up soon and already it has outlined three objectives: consolidating achievements of the first phase; completing the relevant actions not taken into account in the first phase, in particular capacity building, supervision of young people with a view to increasing their participation in the consolidation process of the zone and to deepen the analysis on the issues like illegal exploitation of natural resources and the problem of armed groups; and developing  an effective strategy for mobilizing sufficient resources for the third phase. 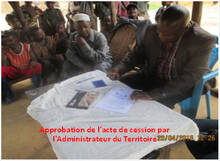 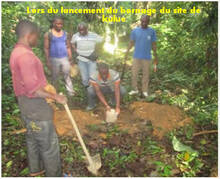 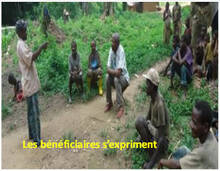