Baghdad 26 April 2016-- UN-Habitat recently held a workshop aimed at introducing and promoting the new legislative texts to address the illegal urban sprawl, preventing future urban irregularities and introduce the investment of remote sensing technology and utilizing satellite imagery in this regard. The workshop was held in collaboration with the Ministry of Planning, within the National Programme of Rehabilitation & Regularization of Informal Settlements /IDP Area in Iraq. These efforts come at a time when the number of displaced persons throughout Iraq exceeded 3.5 million living mostly in informal settlements, whereas many of them will return to their original liberated areas but under different circumstances associated with weakness or even non-existence of structures and local municipal mechanisms.

This will lead to increased urban irregularities and exacerbate the challenges associated with displacement, return and the consequent humanitarian, economic, social and environmental implications. Dr. Mahdi al-Allaq, Chief of Staff of Prime Minister’s Office/ Chairman of the Steering Committee of the National Programme, stressed on the necessity to seek solutions through the national programme, which is based on institutional, legal, technical and financial pillars that lead to drastic treatment of informal settlements in Iraq, according to the road map that was endorsed by the Council of Ministers last summer. He also underscored the necessity to address the problems of these areas through the application of fair and effective scientific solutions that fit the circumstances of each area after conducting the required surveys and assessments.

Mr. Stephen Hubler, the Senior Coordinator of Refugees & IDP Affairs Office in the US Embassy in Iraq, emphasized the keenness of the United States to provide humanitarian aid for displaced people in Iraq, which forms the foundation for achieving political reconciliation. He pointed out that this program is concerned with maintaining property rights and promoting the rule of law. He added that the best solutions for the displaced people are associated with their voluntary and safe return to their original areas or to their voluntary integration within the host communities when circumstances permit.

Dr. Erfan Ali, Head of the United Nations Human Settlements Programme in Iraq, stated that the technical team of the national program recently completed discussions with the Shura Council regarding the new two draft legislations, that were presented by the programme to address solutions for the current informal settlements and to prevent future irregularities, in addition to supporting regulations to addresses the root causes that lead to the emergence of this phenomenon in order to prevent its recurrence in the future. He also referred to the recent approval of the Steering Committee on the proposed financial framework to help in the implementation of the directions of the Programme through the special fund mechanisms for informal settlements and IDP areas, which will be regulated through legislation currently under discussion. 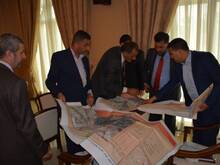 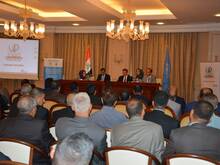