Khartoum, 22 January 2015 - UN-Habitat, The United Nations Human Settlements Programme, has signed a Memorandum of Understanding with the Ministry of Environment, Forestries and Urbanisation of Sudan which outlines their commitment to work together on sustainable urban development in the country. The agreement was signed by the Federal Minister, Hon. Hassan Abdelgadir Hilal, and UN Under-Secretary-General and UN-Habitat Executive Director, Dr. Joan Clos at the opening of the Consultative Workshop on the Spatial Planning Strategy of Darfur during an official mission of the UN representative to the Sudanese capital, Khartoum.

Provision of professional training in Urban Planning, Development and Management

The collaboration outlines the intentions of both parties to work together to share best practice and provide training for professional in the field of urban planning, development and management, and for UN-Habitat to provide technical assistance in the development of a national urban strategy and national urbanisation policies.

During the signing, Dr. Clos emphasised the need to harness the opportunities presented by urbanisation rather than see it as a negative effect of development. "We need a smooth transition from humanitarian response to recovery and economic development," he said. "We must work on the rehabilitation of internally displaced people in the context of rapid urbanisation." In the run up to the United Nations Conference on Housing and Sustainable Urban Development, Habitat III, in 2016, Dr. Clos also congratulated the country for finalising and submitting its National Urban Report; an important document that will feed into the regional report and the discussions that will take place setting the New Urban Agenda.

For his part, Minister Hilal stated that through the partnership, he envisioned "achieving the proper use of natural resources, especially land, to reduce conflict, and to make suggestions for urban planning to reduce irregular urban development." During his visit, the Executive Director met with the Minister for State for Foreign Affairs, Hon. Kamal Ismail, and Hon. Mukhtar Abdel Karim, State Minister for the Environment, Forestries and Urban Development in fruitful discussions around potential future cooperation between UN-Habitat Sudan, and took part in a round table discussion on the new urban agenda. In addition, Dr. Clos met with the UN Country Team to exchange dialogue around the overall context of development and ongoing collaboration between all UN agencies, programmes and funds.

UN-Habitat is the United Nations programme for sustainable urban development mandated to promote the development of economically, socially and environmentally sustainable cities and the provision of adequate shelter for all. Since 2006. UN-Habitat has worked in the Sudan on projects in the Eastern States, Khartoum and the Darfur States, focusing on rehabilitation and provision of basic services for refugees, urban planning and pro-poor housing. 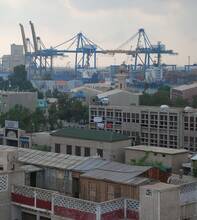