Lima, Peru, October 12, 2015 – On the occasion of the “What Makes a Sustainable City?” event held on Saturday, 10th October, 2015, during the World Bank-IMF Annual Meetings in Lima, Peru, the World Bank Group and UN-Habitat committed to their shared vision of sustainable urban development, and called upon national governments, local authorities, and stakeholders to be involved in the move to a New Urban Agenda that prioritizes ending poverty, sharing prosperity, and propelling environmental sustainability. The United Nations’ 2030 Agenda for Sustainable Development presents a new opportunity to end poverty and ensure prosperity for all. Critical to achieving the Sustainable Development Goals (SDGs), cities are engines of growth and job creation. Good urbanization is not a passive outcome of growth. It is a driver of growth. Cities are responsible for 80 percent of global GDP. When they are well-planned, well-governed, and well-financed, cities drive national economic growth. Yet, benefits of urbanization are not guaranteed. Without appropriate legislation, good planning and implementation, and adequate financing, cities can fail their populations. The challenge is that most of the new urbanization is spontaneous and unplanned. Instead of positive outcomes, it often yields congestion, sprawl, segregation, and pollution. Cities are vulnerable to climate change and disasters because of their concentration of assets, people, and fragile ecosystems. Many of the world’s largest cities are either coastal, in a delta, or on a riverbank. Urban areas are at risk of flooding from powerful storms and sea-level rise. Globally, 80 percent of the largest cities are vulnerable to severe earthquakes and 60 percent are at risk from tsunamis and storm surges. Cities are already responsible for two-thirds of the world’s energy consumption and 70 percent of all greenhouse gas emissions. Cities are beginning to take action, and they have a unique opportunity in helping the world achieve the 2 degrees target. Good and sustainable urbanization, that promotes well-designed compactness and connectivity, is good for climate change mitigation and adaptation. “The speed and scale of urbanization brings challenges, including meeting accelerated demand for affordable housing, well-connected transport systems, and basic services, as well as jobs. This is particularly the case for the nearly one billion urban poor who live in informal settlements in cities around the world,” explained Ede Ijjasz-Vasquez, Senior Director of the World Bank’s Social, Urban, Rural andResilience Global Practice. “In the run-up to the COP21 Climate Summit in Paris, with developing countries experiencing unprecedented population growth in their cities, low-carbon and resilient urban development offers an opportunity for climate change action,” he emphasized. Sustainable development deeply depends on sustainable urban development. The SDGs recognize the power of urbanization to accelerate prosperity and well-being. And they give cities a clear role in this transformation. “In this unparalleled opportunity, the two institutions will join forces to work towards the implementation of the Sustainable Development Goals, especially Goal 11 to ‘make cities and human settlements inclusive, safe, resilient, and sustainable’,” said Joan Clos, Executive Director of UN-Habitat. Clos, who serves as the Secretary-General of the Habitat III Conference, added that “The United Nations Conference on Housing and Sustainable Urban Development – Habitat III in Quito, October 2016 – will be a unique forum for asking national governments to commit to adequate rules and regulations, which govern people living close together and sharing common services; to better spatial planning and design, which optimize well-designed density, connectivity, and diversity; and to a financial plan, which sustains the functioning of the city and ensures economic prosperity.” Heading towards the Paris COP21 Climate Summit and on to Habitat III in Quito, it is time to rethink urbanization and promote national urban policies. Effective public-private partnerships are critical to unleashing the transformational role of sustainable urbanization. The World Bank Group and UN-Habitat encourage national governments, local authorities, and stakeholders to join forces in the move to a new urban agenda that focuses on making cities and human settlements inclusive, safe, resilient, and sustainable. 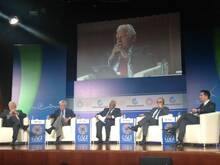