Castries, Saint Lucia, 16 June 2015 - The fifth edition of the Caribbean Urban Forum held in Castries (Saint Lucia) drew to a close on Friday 12 June, after three days of intensive discussions on sustainable urbanization. Some of the topics covered included land management, local economic development, energy efficiency and the urban response to the climate challenge.

The Forum, which gathered over 100 participants coming from the region and beyond, was organized by the Institute of Land Use Planners in collaboration with the Ministry of Physical Development, Housing and Urban Renewal of St. Lucia, Caribbean Network for Urban and Land Management (CNULM), Organisation for Eastern Caribbean States (OECS), Inter-American development Bank (IDB), Caribbean Local Economic Development Project (CARILED), UN-Habitat and the Caribbean Community (CARICOM).

The objective of the event was to take stock of urbanization in the Caribbean and share relevant solutions; the proceedings of the sessions will be compiled to feed the discussions towards a Caribbean position on sustainable urban development ahead of Habitat III. In this regard, two sessions were organized by the Habitat III Secretariat in conjunction with IDB and City Scope, focusing specifically on the Habitat III process including national and regional preparations as well as substantive contributions to a new global urban agenda for the next 20 years.

UN-Habitat principles for sustainable urban development and its relevance in the region were widely discussed topics and sparked lively interactions on the future Caribbean urban agenda. Opening the forum, the Saint Lucian Minister of Physical Development, Housing and Urban Renewal Mr. Stanley Felix stressed on the importance to look at increasing density and compactness in the Caribbean cities to stop the sprawling nature of the current urbanization.

The agency further facilitated an interactive workshop session on "Urban Planning for City leaders" for more than 20 planning practitioners of the Caribbean Islands. The workshop provided them the opportunity to learn about UN-Habitat principles, approaches and tools for sustainable urban development planning and successful case studies of different countries and had the chance to learn from each other.  Winding down after a successful three day event the organizers handed over to the next host of the Forum in April 2016, Suriname. 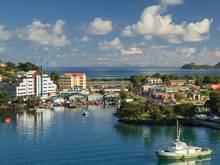