That is the conclusion of a new report by UN-Habitat and partners tracking the progress made since the SDGs were adopted in 2015 and the challenges encountered. It coincides with the first review of SDG 11 at the High Level Political Forum - the main United Nations platform on sustainable development which reviews the 2030 Agenda for Sustainable Development including the SDGs.
UN Member States adopted Sustainable Development Goal 11 in 2015 – the first time that cities and urban development were given a standalone goal. Several other SDG goals are directly connected to urbanization including water and sanitation, affordable and sustainable energy, environment and sustainable consumption.

“Urbanization is one of the most important issues when it comes to sustainable development. We must make sure we do it right if we are to achieve the SDGs and move towards a world where we see an end to poverty, the protection of our planet and everyone enjoying peace and prosperity,” said Ms Maimunah Mohd Sharif, Executive Director of UN-Habitat. “Cities are the spaces where all SDGs can be integrated to provide holistic solutions to the challenges of poverty, exclusion, climate change and risks.”
With the current rate of expansion, more than 700 cities will have populations of over 1 million by 2030. Without proper planning and regulation, this could lead to soaring levels of poverty, crime, pollution and sickness due to expanding slums, lack of clean water and sanitation, congested roads and few or no safe open spaces. Humanitarian crises, climate change-related disasters, conflict and migration are also closely related to cities.

However cities and towns, where half the world’s population now live, can be power houses of economic growth and development. And that can mean an improved quality of life for everyone. No country ever reached middle income status without being urbanized and cities generate around 70 per cent of global GDP.

The Synthesis Report shows that the proportion of those in urban areas who live in slums is decreasing – which points to significant progress being made in providing decent housing and moving people out of informal settlement. However with the global population growth, the total number of people living in slums and informal settlements has increased from 807 to 883 million from 2000 to 2014. Housing is increasingly unaffordable for large swathes of the population with those in Africa particularly badly affected. Air pollution is on the rise and although the provision of public transport is rising, it is still inadequate. Cities are growing at a faster rate than their population – leading to higher costs for infrastructure, more traffic and more pollution.

SDG 11 is also linked to the empowerment of women and girls through access and safety in public spaces, use of basic infrastructure and participation in local governance and decision making.
“By ensuring cities are also planned for women, urbanization can be a true transformative force, that challenges inequality and creates an enabling environment, where everyone can realise their own potential,” said Ms Sharif, UN-Habitat Executive Director.

The report found significant challenges in data collection and analysis for many of the indicators, especially as most did not feature in the Millennium Development Goals and are being tracked for the first time. UN-Habitat is taking the lead in 9 out of 15 indicators in SDG 11.

For more information go to www.unhabitat.org or please contact

UN-Habitat works in over 90 countries supporting people in cities and human settlements for a urban future. The agency has been focusing on urban development for over 40 years. Working with governments and local partners, its high impact projects combine world-class expertise and local knowledge to deliver timely and targeted solutions. The 2030 Agenda for Sustainable Development includes a dedicated goal on cities, SDG 11 – to make cities inclusive, safe, resilient and sustainable. Under the New Urban Agenda, there is a clearly defined and renewed dedication among the global development community to ensure our cities expand in a sustainable way. 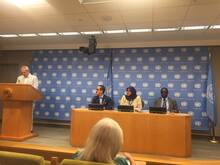