Barangay Pawa, Philippines 2 July 2015--- Rising from the wreckage of Super Typhoon Haiyan, 660 families finally completed the building of their houses and 54 community infrastructure projects in 28 communities in Capiz and Iloilo as the Post-Yolanda Support for Safer Homes and Settlements project implemented by UN-Habitat came to a close last month.

Consequently, a handing over ceremony was held at Barangay Pawa, Municipality of Panay, Province of Capiz, Philippines. The project sought to facilitate shelter recovery and rehabilitation in Yolanda-affected communities in Capiz and Iloilo.

Launched in July 2014, it had a startup fund of USD 2.5 million from the Government of Japan, later augmented with USD 946,000 from the Philippines’ Department of Social Welfare and Development (DSWD).

The primary goal of the project was to capacitate Yolanda-affected communities in the two provinces as well as local government units (LGUs) through a community-driven approach called People’s Process, hinged on enabling a community to champion its own recovery.

Set targets and what was achieved

As the project comes to a head, we revisit targets that were set and how the project fared. The project initially targeted the accelerated recovery for 20 communities, but damage assessment showed a need to extend the reach of the project. Including more communities under an existing national government programme that gives underprivileged communities access to affordable land was done to accommodate as many Yolanda-affected communities as possible.

From the initial target of 20 communities, 28 signed on for the project and the number of resilient core houses to be built was raised from 610 to 660 due to augmentation funds from DSWD. The project was also able to find additional resources from both local government and private entities, enough to raise the number of infrastructure projects from 20 to 54.

The infrastructure component was carried out with the homeowners associations hiring private builders, who eventually built close relationships with the communities. This close relationship saw several of them voluntarily delivering more than the agreed specifications as their donation to the community. This allowed the project to have an impact on the whole community to include families who were unable to receive the new houses.

Initially, 250 carpenters were supposed to be trained on disaster resilient house construction. But with budget savings, the increase in number of houses to be built and strengthened interest among communities, UN-Habitat was able to train 323 semi-skilled artisans and 31 foremen. Of those trained, over 100 carpenters and over 20 foremen were tapped to construct the houses.

Others have now been able to get construction jobs outside the project, with their DRR and construction skills training certificates and solid experience as handy passports to new jobs. Over 170 household self-assessors and guiders (HAGs) were trained to conduct disaster risk reduction trainings and house assessments for 4,000 households in their respective communities. The HAGs eventually also trained families outside their own assigned communities, reaching over 4,500 households.

The impact goes beyond numbers and targets

But the impact of the Post-Yolanda Support for Safer Homes and Settlements goes well beyond numbers and targets. Communities have come together in working towards common goals – be it lowering construction costs by ordering materials in bulk, or evolving from dormant neighborhoods into active ones through organized activities that promote well-being, dignity, and solidarity.

The financial transparency mechanisms set by the project helped instill trust of community members in their leaders, and developed financial literacy that enabled the communities’ finance and auditing committee members to manage millions in project funds―a skill that may serve them well outside the project.

People also discovered their voice and can now ask government and even the private sector for assistance in improving their communities. They realize that they can be more than recipients – they can be collaborators. Many of them are now able to articulate the principles of DRR in shelter recovery and the People’ Process to other communities and have welcomed visits from various entities to discuss their experiences and learning's in great detail.

Targets have been exceeded with 28 communities served, 660 houses built, 54 community improvements done, and over 4,500 households equipped with DRR know-how. But the major takeaway from the project, which can be carried over in future initiatives, is the full demonstration of how recovery and building resilience thrive best as a shared endeavour—with the communities and families themselves driving the process. 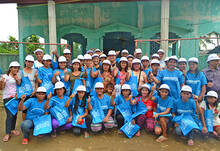