Wuhan, China 04 July 2016–UN-Habitat and the Wuhan Land Use and Urban Spatial Planning Research Center (WLSP) started a new programme to promote urban public space in China. The programme focuses on turning the largest urban lake of China into a connected, integrated and people-friendly green space in the center of metropolitan Wuhan.

UN-Habitat and WLSP will work together on urban public spaces for the next three years. Improved urban public spaces are not only a target of SDG 11 on sustainable cities and communities, but are also increasingly in demand in China, where rapid, intense urban development is giving way to efforts to improve the quality of cities and places.

An Expert Group Meeting gathered for two days in Wuhan, with international specialists from UN-Habitat’s headquarters and its Asia and Pacific regional office and national experts from Beijing, Shanghai and Hong Kong. The team visited the pilot area, known as Donghu or East Lake. The city and WLSP are currently rolling out the first phase of the ambitious Donghu Greenway, turning the 33 square kilometers of lake area into accessible and diverse places of culture and leisure.

The city has bold and innovative intentions: once open, Donghu will be car-free, serviced by public transportation, open for bikes, with free cultural parks and educational institutions along the lake with no fences and gates.

The Donghu Greenway project is also more than the usual ambitious blueprint. It was started with strong public consultation. WLSP gathered the inputs of Wuhan’s citizen’s through social media, web-applications and surveys. The center, which resorts under the Wuhan Land Administration and Urban Planning Bureau, has a long experience of reaching out to rural settlement communities along the lake.

The Expert Team held intensive deliberations and provided initial recommendations to WLSP and city officials. The national experts acknowledged that the level of consultation is truly innovative in China. City infill and renewal projects elsewhere will need to learn to do the same. The Donghu project is poised to become a pioneer urban public space initiative in adapting the principles from UN-Habitat’s Global Public Space Toolkit and also through localizing the International Guidelines on Urban and Territorial Planning.

The expert team further commended the comprehensive vision of the project and the many useful planning components. These include the Transit Oriented Development approach, the people-oriented slow mobility solutions, the variety of solutions to enhance urban biodiversity, multiple applications for purifying lake water through natural means and the provision of public amenities adjusted to people’s needs. Renewing existing informal settlements without resettlement but focusing on converting their informal economy towards new services is also innovative in China.

Strategic recommendations from the expert team include developing a clear long-term mobility and space-use strategy of Donghu as a central area for the metropolitan Wuhan and a strong legislative framework as for instance has been done in Hong Kong to reinforce the public space status and development rules and a city-wide public space strategy. In addition, the experts explained to city officials that similar large projects in other countries would have a clear and transparent economic and business plan for the upkeep and further development of Donghu. The size of the area requires considering new job and business creation as long as not harming the environment.

A hub for education, culture and industry

Wuhan is strategically located in the heart of China and is a prosperous central in a cluster of nine cities with 30 million people. The city, at the Yangtze river, has a large inland port and has excellent road and rail connections to the whole of China. Wuhan is the hub for education, culture and industry in the central region of China. It is well known for its many lakes.

Twenty five percent of the land area of Wuhan is covered by water. Donghu is the most iconic and nationally protected. Turning it into a central public space of a metropolitan city is an endeavour that will take a decade or more. To follow up on the recommendations, the UN-Habitat initiative will revisit the Donghu Greenway project in January 2017, will invite other cities to come forward with innovative demonstrations and collaborate nationally for new policy guidelines with the Ministry of Housing and Urban-Rural Development. 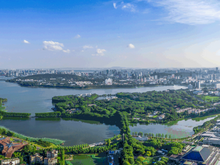