Walvis Bay, 27 May 2015 - Thirty mayors and chief executive officers from Namibian municipalities have participated in the second workshop focusing on the Quick Guides for Policy Makers on Housing the Poor in African Cities in Walvis Bay, Namibia. The workshop that took place from 20th - 22nd May 2015, was also attended by representatives of the national government and the Shack Dwellers Federation of Namibia. The first workshop was held in March in Windhoek.

The three-day workshop was organized by UN-Habitat in cooperation with the Namibian Association of Local Authority Officers (NALAO), the Polytechnic University of Namibia, the Shack Dwellers Federation of Namibia (SDFN) and the Namibia Housing Action Group (NHAG). The training programme was drawn from Quick Guides Series for Policy Makers on Housing the Poor in African Cities which has been produced by UN-Habitat with the financial support from the Cities Alliance.

The Quick Guides are a series of eight concise and easy-to-read publications on pro-poor housing and cover themes such as land supply, evictions, rental housing, local government and other relevant themes. The purpose is to give policy makers quick information and tools for them to make decisions that benefit the urban poor.

Accompanying workshops provided the opportunity for UN-Habitat to test and enhance the training materials which are now compiled and organized in the Training Facilitator’s Guide that accompany the Quick Guides series .

These materials can be used by training institutions and universities to train policy makers and support broad-based capacity building in housing policy and implementation in African countries. The training pack and Facilitor's Guide will soon be available on UN-Habitat website.

This second workshop focused on the critical and relevant themes of urban Africa and on the challenges of providing housing solutions for low-income families. For Namibia the workshop occurred at a relevant moment given that the country is presently undertaking an ambitious mass housing programme that aims at reducing housing deficits in the country.

Shack Dwellers International and its affiliates in the country are also concerned about housing solutions that incorporate users and organized communities. Cross-cutting themes such as gender and housing as a human right were also discussed and proved to be relevant for local stakeholders.

In addition, the workshop included a site visit to community-based housing construction schemes carried out by Shack Dwellers Federation of Namibia and the houses built as part of the current Namibian mass housing programme. The workshop came at an opportune time given the on-going public debate about the housing needs in in Namibia. 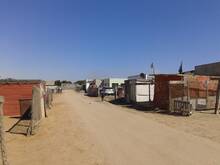