In the context of the signed framework agreement between the Government of the Swiss Confederation and the Government of the Arab Republic of Egypt regarding Technical and Financial Cooperation ratified on 26th of November, 2013, the project agreement was signed by the Egyptian government and the Swiss government in April 2018. Dr Assem El Gazzar, Deputy Minister of Housing, Utilities and Urban Communities for Urban Development and chairman of the General Organization for Physical Planning (GOPP) signed today the separate agreement of the “Hayenna”: Integrated Urban Development Project funded by the Swiss State Secretariat for Economic Affairs (SECO), the project will now start implementation.

The “Hayenna” (Our District) project aims at enhancing urban development in Egypt through piloting innovative approaches related to urban planning and design, municipal finance and local economic development as well as urban policies and legislation. UN Habitat, the implementing agency of the project, will soon start project implementation in the Governorate of Qena as the first pilot governorate, while a second Governorate will be selected after consulting the project partners within the first year of implementation.

The project will improve the living conditions of the inhabitants of four selected areas where pilot interventions will take place aiming at more formal and transparent urban planning, management of land values and improved public services. A considerable number of jobs are expected to be created through the project since the improved urban design will support in particular small and medium private sector activities in the targeted inner city areas.

In addition to its main goals, "Hayenna’s" activities supports ongoing efforts to improve the legal and institutional frameworks governing urban development at the national level contributing in particular to a better framework for managing urban expansion. Addressing important issues for the development of the country, the project aims at supporting the implementation of the Egypt Vision 2030 as well as the National Strategic Development Plan 2052.

To ensure sustainability, the project focuses on transferring knowledge by enhancing the capacities of state employees at the municipal and the national level. Training topics include integrated urban planning and development as well as effective land management and design. “Hayenna” will also train them on improved local public financial management through application of the betterment levy, a tax collected on increasing land values due to public infrastructure investments.

With the signing of the separate agreement, the project, which will be implemented until 2023, is valued US$11.8 million, with a contribution of $8.1 million by the Swiss State Secretariat for Economic Affairs (SECO) and US$3.6 million by the Egyptian government. The project will be implemented by UN Habitat with the General Organization for Physical Planning (GOPP) as the national counterpart.

During the signature ceremony, Deputy Minister Assem El Gazzar highlighted the importance of this pilot project in providing and testing urban planning tools that help to prevent the creation of informal settlements.  Dr. El Gazzar also mentioned that the project’s innovative approach combining urban planning and public finance is especially promising. He expects the project to deliver lessons learned that could support the government in improving the urban development process. At the end Deputy Minister El Gazzar thanked the Swiss Government for funding the project and UN Habitat for its successful cooperation with the Ministry.

Ms. Rania Hedeya, UN Habitat Egypt Program Manager, said that the project serves to bring the New Urban Agenda and its main objectives to life. Building on successful pilot projects in collaboration with GOPP on detailed planning in expansion areas in Qalioubeya, the flagship project will allow UN Habitat to translate key ideas and approaches of UN Habitat into the Egyptian context. With cities continuing to grow in Egypt as well as worldwide, the project is an important contribution to managing urban growth and enabling everybody to enjoy the benefits of urbanization. Ms. Hedeya also added that the scaling up of the project and the lessons learned are very crucial for the success of the project.

For the Swiss State Secretariat for Economic Affairs (SECO), the project is the start of a deepened engagement in the field of urban development. Corinne Henchoz Pignani, Head of Cooperation at the embassy of Switzerland in Egypt, emphasized the enthusiasm of the Swiss Embassy regarding the new cooperation with UN Habitat in the field of urban development. With a fast increasing population and growing cities, urban issues are one of the most pressing challenges in the country. Economic prosperity thus demands functioning cities which makes technical cooperation in this field important.

A first kick-off mission to Qena Governorate will take place end of December, laying the ground for the implementation of the project in the first two pilot sites in Qena city. 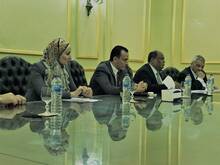