Goma, 23 November 2016 – UN-Habitat, in close collaboration with the Government of the Democratic Republic of Congo, has launched a USD 12 million land programme that seeks to promote peace and stability.

The unveiling ceremony of the Community Participatory Land Use Planning programme in September was well attended by participants of different institutions including partners and the media. Stakeholders from Kinshasa, North Kivu, South Kivu and Ituri attended the ceremony which was presided over by Julien Paluku, Governor North Kivu Province. Mr Paluku expressed commitment from the National Government to support the program and to carry over the ongoing land reform to the provincial level.

The two-day workshop that gathered various representatives - including national and provincial authorities, civil society organizations, women and youth groups, community leaders, UN bodies - provided substantial information on how to engage different bodies with clear roles and responsibilities in the process of land use planning. It was also a platform for interactive exchange on how to ensure a successful programme planning and implementation at different spatial and administrative levels.

This DFID-funded programme implemented by the UN-Habitat country office in DRC seeks to promote the concept of integrated land use planning at community scale to mitigate the risk of land disputes while unlocking the potential for increased socioeconomic development in the three provinces of North Kivu, South Kivu and Ituri.

Land as a root cause of conflict

The relevance of land use planning was highlighted within an international stabilization framework for peace building among communities. The main expected outcome is to reduce and address the root causes of land conflict. The proposed strategy is to ensure a people-centered approach with a focus on ownership, inclusiveness, participation and empowerment of community members while taking in to consideration the cross-cutting issues of gender and youth.

Within the frameworks of the Voluntary Guidelines (VGGT) and the Comprehensive Africa Agriculture Development Programme (CAADP), the concept of land use planning will bring together various actors that are decision-makers on land issues, including customary authorities, conventional land administration and civil society organizations, with the aim of increasing transparency and inclusiveness to prevent land conflict in the context of state building.

The lessons drawn from the process of implementing land use planning will not only inform the national land and territorial planning reforms processes when testing tools but also provide options for securing community land rights and a development framework in line with the SDGs. GLTN will be supporting the implementation of this new programme through the various tools and capacity development at the country level. 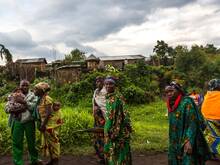