Oslo, 17 March 2015 - More than 30 experts from around the world met in Oslo, Norway last week 2-3 March for a two-day expert group meeting on global Guidelines for City Climate Action Plans. The meeting was organized by UN-Habitat in close collaboration with Cities Alliance Joint Work Programme Partners, UNEP and the World Bank.

Experts from cities, local government institutions, academia, the private sector, national and international institutions discussed and shared experiences on city climate action planning. This first meeting successfully closed with agreement on a basic set of building blocks for the guidelines and a solid drafting process towards the launching of a ‘version 1.0’ at the UN Climate Change Conference (COP21) in Paris in December 2015. The Guidelines for city climate actions plans will complement UN-Habitat’s tools and guidance on city climate action.

Local authorities and conditions vary greatly in terms of mandates, planning frameworks, degree of autonomy of local authorities from national governments, access to finance and climate priorities. Still, some general normative guidance, particularly at the level of principles, could be useful to assist cities throughout the world that are starting or improving their climate action planning processes.

Guidelines on City Climate Action Plans: From Idea to Implementation

The meeting in Oslo, Norway was organized following initial discussions and strong encouragement to UN-Habitat’s to develop a normative guidance on city climate action plans. At the 2014 World Urban Forum in Medellin, UN-Habitat’s close city and institutional partners identified a gap on normative guidance what city climate change plans could and should entail. At an initial scoping meeting with a wide range of partners at the Lima 2014 Climate Change Conference (COP20) the idea for developing guidelines matured and we launched a process to develop global guiding principles under the Cities and Climate Change Initative (CCCI). Over the course of 2015, a small number of expert groups will be organized to mature the guidelines developed in a virtual collaborative process, including over 50 cities, institutions and other relevant partners and many more in an envisioned peer-review process.

Ms Marit Viktoria Pettersen, a Climate Change Expert from the Norwegian Ministry of Foreign Affairs underscored the timeliness of this important work by linking the various international efforts on this subject: It will be an interesting year ahead for cities and climate change with the finance and development meeting in July, SDG Goal 11 on cities, the COP in Paris, and Habitat III looking further ahead into next year” 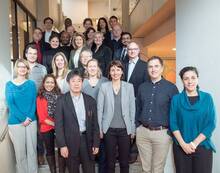