Nay Pyi Taw, 15 June 2016 --- The President of the Union of Myanmar, Mr. U Htin Kyaw, addressed six-hundred participants, including the Media at the ceremony for the World Environment Day 2016 on 5 June held in Nay Pyi Taw, Myanmar. The event was organized by the Ministry of Natural Resources and Environmental Conservation (MoNREC) in cooperation with UNEP and the Myanmar Climate Change Alliance (MCCA) Programme of UN-Habitat & UNEP funded by the EU, with also support from UNDP and the Asian Development Bank. In addition, Union Ministers and Deputy Ministers, Parliamentarians, the Mayors of Yangon, Mandalay and Nay Pyi Taw, and representatives of UN Agency representatives and NGOs participated in both ceremony and the seminar that followed.

With the 2016 theme of “Go Wild for Life: Zero Tolerance for the Illegal Wildlife Trade” the event engaged participants and Media to raise awareness on illegal wildlife trade. The President stated that “whoever we are, and wherever we live, we have to show zero-tolerance for the illegal trade in wildlife in word and deed” and recalled the efforts made by Myanmar to combat Illegal Wildlife Trade, as well as several other important policy actions, such as the National Climate Change Strategy and Action Plans, formulated by MCCA. Ms. Isabelle Louis, from UNEP, stated that “We should recognize that wildlife crime seriously undermines the economies of developing countries and threatens the livelihood of the most vulnerable communities, and therefore, undermines countries commitment to meet the 2030 Sustainable Development Agenda adopted last year”.
MCCA co-organized the event, linking the observed and projected effects of climate change onto the development process of Myanmar and its resources, including the biodiversity. The Chief Technical Advisor (CTA) of MCCA, UN-Habitat & UNEP, Mr. Pasquale Capizzi, presented the National Climate Change Strategy & Action Plans (NCCS&AP) formulated by MCCA and due for validation on next 10 June 2016. Myanmar is engaged since 2011 in a robust democratization process, which resulted in the election of the first democratic government in decades. But its development process may be challenged by the unsustainable use of resources in a context of climate change. In this context, if the ambitious goals of sustainable development are to be reached by the Country, a result-based, actionable strategy must be implemented that turns by 2030 Myanmar into a resilient country by means of smart agriculture; resilient and sustainable cities; healthy eco-system; sustainable energy, transport and industry development; human health and disaster risk reduction; and education.

The Strategy is the result of a one-year consultation process, that involved 2000 people in 5 states and regions, all national Ministries, the 3 major Cities, Civil Society Organizations, the Development Partners and the Private Sector. But the CTA also highlighted the need to remember that all policy documents, including the Strategy, must be delivered for the people with an actual impact on the ground. He then described. The day and dialogue with the Media showed a sense of urgency for the challenges ahead, especially as concerns Illegal Wildlife Trade and climate change, but also optimism for the work ahead and a strong willingness to partner.
MCCA is a UN-Habitat and UNEP flagship partnership, funded by the European Union and implemented under MoNREC. For information visit www.myanmarccalliance.org or Facebook https://www.facebook.com/myanmarccalliance/ or Twitter https://twitter.com/myanmar_cca 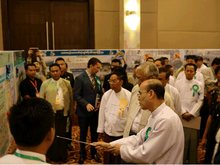 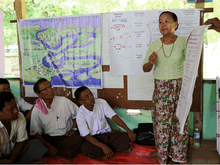