New York, 22 September 2017 – Youth took centre stage at the United Nations General Assembly, calling to be liberated from the margins and welcomed into the centre of decision-making, based not only on their right to be there but their actions in creating economically and socially inclusive and dynamic societies.

The Cities for All event brought together young people from Kenya, France and Zimbabwe with UN Women and UN-Habitat to discuss how world leaders can support youth’s meaningful engagement in decision making at all levels of government with the goal of achieving the 2030 sustainable development goals (SDGs) and the New Urban Agenda (NUA).

The event highlighted how the provision of urban space can facilitate youth’s engagement. This meeting followed the visit of the UN Secretary-General to the Mathare informal settlement in Nairobi Kenya during the 2017 International Women’s Day.

The session, which began with a video shot by the One Stop Mathare Environmental Youth Conservation Group, outlined the journey they went through to acquire a space in the middle of the slums and how they created in this space through garbage collection and recycling, and how this space became central to the economic and social well-being of the community.

Young people at the core of advancement

Currently the One Stop and adjoining football pitch are the only public space serving a population of more the 35,000 inhabitants. It is the same facility that the Secretary-General visited during his visit to Kenya following his appointment as the new UN Secretary General, and engaged in dialogue with youth from the One Stop, inaugurated the Slum Football Pitch, and met with young women political aspirants supported by UN Women.

Youth, Informality And Public Space: A Qualitative Case Study on the Signi cance of Public Space for Youth in Mlango Kubwa, Nairobi.

“This research had the aim of examining whether public spaces play a role in improving the lives of young people,” said Vesterhus, “And while concluding that public space certainly does play a role in advancing this community, the political strategies and diplomatic abilities of the young people in the village are at the core of these advancements.”

Vesterhus went on to detail the challenges faced by youth in the slums spatially, socially and politically, framing the session and ensuing conversation.

The strength of communities

UN-Habitat Executive Director Dr. Jon Clos spoke at the session, highlighting the linkages between economic, spatial and social equity. He commended the efforts of the young men and women in reclaiming their dignity through the creation of the One Stop Centre.

“Public spaces are for the public good and should be protected by the community,” said Dr Clos. “The rich and people in authority will use all means to grab the last space and it is only the strength of the communities that will help them defend and protect the available public spaces.”

He went on to reflect on the video from the Mathare youth, and how they used economic means to create a social good.

“The youth in Mathare have cleared and recycled garbage to reclaim the public space which now the entire population is currently using,” he stated, “Urbanization can be done; what we need is the political will. It is not expensive, it is doable.”

Women as entrepreneurs and decision makers

Maria Noel Vaeza, Director of Programme Division for UN Women called for gender equality, highlighting the many intersecting barriers women face.   “In over 189 countries women can’t inherit land, that means they cannot build houses, which is a basic need; in 76 countries women cannot access credit facilities without a man’s signature,” said Director Vaeza, “yet women make up the most entrepreneurs; who without credit facilities cannot implement their initiatives.”

She applauded the fact that in Mathare women were playing football, often represented as an all male sport, and were engaged in running for political office.

Three youth representatives spoke at the session and all focused on promoting the rights of youth living in slums, especially young women. Mureil Vincent, representing the Huairou Commission, a global network of women’s groups, stressed that women need to be included in governance and decision making, especially as decision making related to the localizing of the Sustainable Development Goals.

“We need to create political space for women,” stated Ms. Vincent, “this can be done by building and empowering grassroots women’s networks.”

Annah Sango, representing Zimbabwe Young Positives, a youth-led group fighting to improve the lives of those living with HIV, also advocated for the engagement of young women in the community, promoting “models of social responsibility where the community takes charge”.

Towards an asset-based community development model

Wrapping the session up was Linus Sijenyi, project coordinator for UN-Habitat, who highlighted the challenges faced by youth living in the slums including unemployment, disease and drug and substance abuse, and called for practical solutions.

“We must face these challenges as we saw my brother, Isaac Musua, do in Mathare,” stated Sijenyi, referring to the Mather Environmental video. “I propose an asset based approach, such as John Mcknight’s Asset Based Community Development model, which builds on the successes the community already has, and thus guarantees ownership and sustainability, and empowers groups such as young men and women to adequately address their needs.”

By the end of the session it was clear that all the speakers needed no convincing that young women and men played leadership roles in their communities, and that it was the role of the UN and other agencies to provide support to them both in the provision of public space as well as supporting directly youth-led groups and activities.

“It is messy, I always say that Nairobi is messy. It’s messy, noisy, and has fumes all over,” said one Mathare youth respondent to the Youth Informality report. “But I always tell the youth…that out of all this mess, we have some gold. Crime is not the answer. Youth is our gold. Out of the fumes, the garbage, the blocked drainages, there is some gold.” 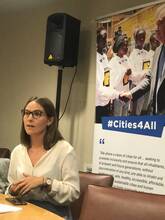 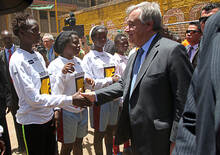