Gaza, 02 March 2016-- UN-Habitat through a partnership with the Dutch Creative Industries Fund deployed a team of four planning and architectural experts from Belgium, Netherlands, and Germany for a technical exchange with Gazan planners, engineers and community representatives in the context of developing detailed local outline plans for Abu-Reida and Al-Najar neighborhoods in the Municipality of Khuza’a in south eastern Gaza.

Khuza’a Municipality was one of the most heavily affected by the 2014 conflict with 179 housing units totally destroyed - 35 per cent of the total units - and many more damaged.

In addition, Khuza’a experienced significant damage to its infrastructure including water and road networks. With the financial support of the UK Department for International Development (DFID) UN-Habitat, in partnership with the Palestinian Housing Council and the Norwegian Refugee Council, began a process of supporting Khuza’a to review and develop new detailed outline plans for the two heavily damaged neighborhoods. The overall ambition of the project is to ‘build back better’ and include innovative planning concepts in the design of their neighborhoods as they look to recover from the conflict.

Joe Hooper, Head of Office for UN-Habitat in the State of Palestine said: “Participatory spatial planning is critical in Gaza. With a constrained land area, fragile ecosystem, a growing population, and the significant damage caused by recurrent conflict, every square metre is a precious resource in Gaza and must be optimized in terms of use. The approach in Khuza’a shows the value of equipping the community with the tools they need to design a better future and built environment.”

Through a series of participatory sessions over the course of four days, the international experts shared their experiences and spatial planning approaches related to water infrastructure, public space, street connectivity, and other issues; their international experiences provided inputs and inspiration to the community members as they further refined the detailed plans for their neighborhoods.

Rogier Van den berg of UN-Habitat’s Urban Planning Lab said: “While rebuilding destroyed houses and catering for natural growth are the primary concerns, a sufficient street network and a network of public spaces should be reserved to sustain accessibility and to provide spaces for economic and cultural activities, for children to play in, and for the growing community to interact.

"The participatory process started in Khuza’a is an exemplary model and with the support of the Dutch Creative Industries Fund it is hoped to develop innovative concepts and see tangible results on the ground for the people of Khuza’a,” said Van den Berg.

Looking ahead, the Mayor of Khuza’a Mr. Shehda Abu Rook said: “It is time for citizens take control and play an active role in shaping the future of their neighbourhoods and communities based on their needs. Well planned cities are not only more efficient, safer, and more conducive to a better life for all citizens, but can also attract needed investment." 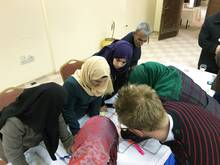 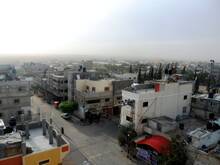