Barcelona, 27 April 2016 – An Expert Group Meeting (EGM), Linking Relief, Rehabilitation and Development (LRRD): UN-Habitat Gender-Responsive Engagement in Post-Conflict Contexts was recently held in Barcelona. The meeting focused on the refinement of methodologies employed by UN-Habitat in three issue areas: housing & livelihoods, safety & security and spatial planning, in relation to gender equality in urban post-conflict contexts. Post-conflict contexts are situations in which open warfare has come to an end. Such situations remain tense for years or decades and can easily relapse into large-scale violence. A post-conflict context can further be characterized by negative or positive peace, the former of which is characterized by indirect and structural violence and not only direct violence.

Positive peace entails restoration of relationships, the creation of social systems that serve the needs of the whole population and the constructive resolution of conflict. This can only be achieved through inclusion of all stakeholders. Unfortunately, women and girls face multiple disadvantages in post-conflict contexts. Within this group, the layered identities of indigenous women, international undocumented migrants, and refugees as well as internally displaced persons will render them particularly vulnerable. Violence stirred from conflict only contributes to exacerbating negative dynamics, leaving women at the margins in post-conflict contexts.

Addressing the factors of marginalization becomes essential for supporting stabilization and reconstruction. Hence, it is vital to the processes of rehabilitation, resettlement and reconstruction, that women’s and girls’ different roles, capacities, vulnerabilities and needs are recognized in the planning and retrofitting of human settlements in post-conflict contexts. Security Council Resolution 1325 represents an important framework mandating the meaningful role of women in post-conflict processes, and an important point of convergence in programming both humanitarian and development initiatives.

The 25 experts from all over the world reviewed innovative and gender-responsive mechanisms for LRRD; while considering best practices and strategies followed by UN agencies and other stakeholders to ensure broader non-discriminatory engagement of women and girls. During the two days of presentations and technical discussions, high-level UN officials, academics, civil society and grassroots experts reviewed different aspects of gender-responsive engagement in post-conflict contexts.

Specifically, how to include grassroots women in post-conflict contexts; how to address safety and security in a gender-responsive manner in urban contexts; how to expand the People’s Process across UN-Habitat’s engagement in order to improve participation and influence policy-driven initiatives and finally, how to ensure the upcoming Habitat III outcome document the ‘New Urban Agenda’ will be fully engendered. Meeting experts made the decision to produce a Communiqué of recommendations for release at the World Humanitarian Summit and Habitat III. Furthermore, knowledge captured during this EGM is expected to inform UN-Habitat’s upcoming publication UN-Habitat’s People Process: a gender-responsive engagement in post-conflict contexts. 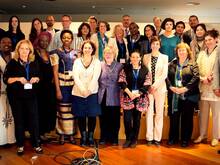