Nairobi, 8 March 2017, International Women’s Day – On his first visit to Kenya as Secretary-General of the United Nations, António Guterres visited a community space in Mathare, home to approximately 800,000 people and Nairobi’s oldest slum, to meet members of the community benefiting from UN programmes and partnerships. The visit coincides with International Women’s Day – the theme of which is “Women in the changing world of work” - and the Secretary-General visited a young women’s ICT training program, met with footballers from the Up for Slum Dwellers and Mathare Women’s team, and talked with young women involved in the political process.

“I have seen women being the great victims of poverty, of conflict, of violations of human rights in different parts of the world,” stated the Secretary-General, “The protection of women in these circumstances in absolutely essential but I believe that the only way to make that protection effective is to give full priority to the empowerment of women.”  The empowerment of women and girls are among the U.N.’s 17 global Sustainable Development Goals designed to tackle poverty and inequality, especially for those women who live in slums and informal settlements and in conflict situations.

UN-Habitat’s research has shown that youth face repeated obstacles in accessing public space for their development.  In the 2015 report Youth And Their Needs Within Public Space researchers found that this can be attributed to high crime rates and unfit public spaces, derived from issues such as insufficient lighting and unsafe access. Young women face the same challenges as young men, but are in addition victims of societal and cultural norms and are especially vulnerable to harassment and discrimination; which can disproportionately limit their access to education, health services, employment, and leisure activities.

“We are thankful for the resourcefulness of the young men and women in our community,” stated Isaac “Kaka” Muasa, “but we need help to overcome some of the most pressing challenges such as establishing safe spaces, and running programmes such as our women’s Slum Soccer programme. For example, we are grateful to the City of Asker who has donated football equipment to the young women’s teams.”

UN-Habitat’s One Stop Youth Resource Centres, of which the Mathare Centre is affiliated, is a programme that has been running since 2003 in East Africa, and provides the model for the Mathare Centre in cities such as Kigali, Rwanda and Mogadishu, Somalia. UN-Habitat recognizes that safe spaces for young men and women to interact, learn and access services are critical to their healthy development.

Mr. Guterres inaugurated the Slum Soccer Football Pitch, played football with the young women from the Up for Slum Dwellers and Mathare Women’s team, visited the Innovate Kenya centre, and met women political aspirants brought together by UN-Women, to discuss the challenges faced by women trying to run for and serve in political office.

Through the Participatory Slum Upgrading Programme, UN-Habitat is working with city and national authorities to provide security of tenure, as a matter of priority, to women and their families living in slums. In addition,  the Programme advocates the investment in slum upgrading programmes and housing development programmes for the poor, while ensuring women’s effective participation. To date, more than 268,000 people have improved access to basic services, such as water and sanitation, and thus created better living conditions for women living in slums.

Watch a video on the Mathare Centre and Slum Soccer Pitch here: https://youtu.be/WZKmBNc1Kr4

An Interview with Wendy Achieng, Captain of the Up for Slum Dwellers team: https://vimeo.com/141649171 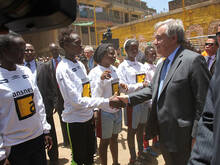 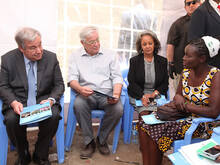