Kabul, 02 June 2016 - “Making cities the drivers of economic development” captures the importance of urbanization in the National Unity Government’s reform programme for Afghanistan during the country’s transformation decade – 2015 to 2024. On Monday this week, President Ashraf Ghani announced the formation of a “High Council on Urban Development” chaired directly under his leadership and comprised of key urban ministries with the Ministry of Urban Development and Housing at its center, to shape the country’s urban growth presented in the “Urban National Priority Programme (U-NPP).

(2) Ensure Adequate Housing and Access to Basic Services for All;

The President, CEO, and dignitaries were briefed on the main objectives and outputs under each of these three pillars by main urban government partners engaged in the formulation of the document.

Urban NPP is a culmination of seamless coordination between key government stakeholders - Ministry of Urban Development and Housing (MUDH), Deputy Ministry of Municipalities (DMM), ARAZI (Afghanistan Independent Land Authority), Desabz City Development Authority (DCDA), and municipalities. President Ashraf Ghani commended the government agencies for “good coordination among urban sector over last 18 months” to prepare a comprehensive document which will enable sustainable and balanced urbanization. The urban stakeholders informed that the document was developed through an extensive national and sub-national consultation process which reached out to over 2,000 Afghans, of which over 30 percent were women, to ensure that the people’s vision and aspiration were reflected in the vision and aspiration were reflected in the U-NPP.

The President highlighted the challenges of urban areas ranging from urban sprawl, social exclusion, inequalities in service delivery, and poor rights to land and housing. Amidst these challenges, he identified the government’s priorities in the urban sector in the coming years, namely – registration of all public and private land completed by ARAZI by 2020; managing urbanization through planned city extensions by MUDH; encouraging private sector participation in urban development; and fostering rural-urban linkages to balance benefits of economic growth.

At this event, the President also inaugurated the reconstruction and rehabilitation work of the historic Dar-ul-aman Palace which was destroyed during the country’s civil war, to symbolize advent of a new era, new vision, and new beginnings. The event was attended by Chief Executive Officer Abdullah Abdullah, Speaker of Woleshi Jirga (Lower House) of Parliament Abdul Rauf Ibrahimi and other dignitaries, who endorsed the importance of heritage preservation to fulfill the hopes of Afghan people. Urban NPP reached an important milestone at this event. Minister Sadat Naderi appreciated and acknowledged the technical support provided by UN-Habitat in the development of Urban NPP. The Minister also shared the roadmap going forward before the Urban NPP is officially adopted at the Brussels conference to be held in October, 2016.

UN-Habitat is supporting the U-NPP through the Future of Afghan Cities Programme (FoAC) funded by the Australian and UK Governments. A series of discussion papers have been produced and can be downloaded from http://www.fukuoka.unhabitat.org/projects/afghanistan/detail23_en.html 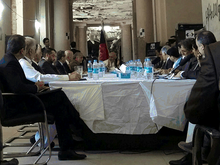