Nairobi 1 October 2015—A total of  93,000 votes were cast to elect the sixteen new members of the UN-Habitat Youth Advisory Board. Twelve youth, 6 men and 6 women, representing six regions of the world, will take up their posts for the next 4 years and represent the issues of youth and urbanization at the regional and global level. In addition to the 12 regional representatives, also chosen were 4 special advisors selected for housing, post-conflict, Future Saudi Cities programme and youth with disabilities.

“We at UN-Habitat are very proud to announce the 16 Youth Advisory Board representatives,” stated Youth Unit leader Douglas Ragan, “Over 93,000 youth have spoken loudly on the importance of youth and urbanization. These youth take up their posts at a critical time, with the global community adopting the Sustainable Development Goals (SDGs) and the important SDG 11 Urban Goal, and on the verge of creating the New Urban Agenda at Habitat III next year.”

Since the Board’s establishment at the World Urban Forum in Nanjing in 2008, significant progress has been made towards mainstreaming and engaging youth in UN-Habitat programmes such as the Urban Youth Fund and the One Stop Youth Resource Centres, and in global processes such as the development of the Sustainable Development Goals and Habitat III. *Please click on the names to see the full bios of the YAB members. 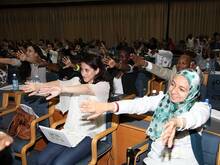