“The current trajectory of urbanization which for the most part leads to congestion, air and water pollution, slum formation, inequality and urban poverty is not sustainable. Planned will include the provision good roads, drainage systems water and affordable housing for the teeming population. However, he observed that many cities in the world still rely on out dated modes of planning and unsustainable forms of urbanization,” he said.

The Director noted that the old ‘Master plan” approach are often inflexible, costly and to large measure never implemented. The New Urban Agenda (NUA) which will be agreed in Quito, Ecuador in October 2016 has at its core, proper urban planning, rules and regulations and municipal finance. A shift in mindset will require the enhancement of administrative and technical capacities across and at national and municipal levels.

He further opined that the New Urban Agenda will require cities to adopt clear means of implementation, adoption of a city-wide approach, as well as concrete strategies and actions. Responding to some of the issues raised, Prof. Oyebanji suggested that there exist strong links between planning, urban laws and economic development and therefore policies for cities must be integrated across all levels of government adding that cities must find a way to strengthen their finances citing London as an example of a city that has reinforced development through public private partnerships land taxes and user charges.

“The 2016 World Cities Report summarizes 20 years of intensive research which employed technical discussions, expert consultations and critical review on urbanization across regions of the world. It took stock of, and centers on the ways production and consumption changed drastically since the UN-Habitat Conference in 1996,” he said. In his address Vice-Chancellor of the Federal University of Technology Akure (FUTA) and chief host of the event, Professor Adebiyi Daramola agreed said that the launch event was very significant in many respects as it is part of concerted efforts of the University to promote research, to create awareness and sensitize the general public on the need for a change in order to better respond to contemporary challenges.

Professor Daramola further said the event was also designed to foster collaboration between FUTA and the UN-Habitat to address some of the challenges associated with lack of adequate preparation for urbanization in Nigeria as in other countries of the world such as insecurity and increasing risk of terrorism, urban warfare, disease and pandemics. In addition the Vice-Chancellor hoped the event will sensitize Government at all levels to the significant role that reports such as the World Cities Report play in informing policies and actions taken by cities and their leaders to make a positive impact on housing and slums, risk reduction and basic urban services.

The Minister of Education, Mallam Adamu Adamu who was represented by Mrs. Rakiya Gambo Ilyasu commended the Federal University of Technology, Akure for taking the lead in the Nigerian education sector and indeed Nigeria as a whole, for the initiative to host the launch of the all-important report. The Minister agreed Nigeria has come a long way in urban development but that there much room to do better by implementing the NUA that will empower cities with the knowledge and competence to prepare for the challenges that are associated with urbanization. The World Cities report 2016 was launched by the Osemawe (Leader) of Ondo Kingdom, Oba Victor Kiladejo who expressed delight at the relevance of the event to the actualization of the New Urban Agenda. 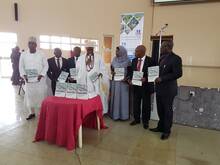