Nairobi, 29 April 2015-- A video awards ceremony took place recently to award winners of the recently concluded UN-Habitat Participatory Slum Upgrading Project video competition at the just concluded 25th session of the Governing Council. The awards went to Burkina Faso, Cameroon and Nigeria in first second and third place respectively for their films that came out on top in the video competition on the topic of ‘documenting change towards improving living conditions in slums and integrating slums into the formal city.’

The winning videos were screened in front of a large audience of participants representing various NGOs, community based organizations, local and national government authorities and slum dweller associations, creating an opportunity for dialogue and exchange on poverty reduction. The videos presented new public private partnerships and emphasized the election of community representatives, with a focus on the participation of vulnerable groups and women.

The videos drew attention to the current living conditions of slums dwellers, who lack sanitation, potable water, electricity, tenure security and live in overcrowded spaces. Moreover, people living in slums areas are prone to environmental risks. The videos also highlighted how working with PSUP had allowed all stakeholders in slum upgrading to participate from the start, and define urban profiles and realistic projects. Brief discussions were held during the ceremony where participants emphasized the importance of slum upgrading as an alternative to forced evictions and stressed that slum dwellers can push the government to partner with them for development, and prevent evictions.

There is intellectual capacity within the community to decide upon their own future and to stand for their rights. Mr. Michael Umewedimo, who was present to receive the video award on behalf of CMAP Nigeria, said that the video competition initiative had created an opportunity for dialogue and he hoped that the stories in the video would incite further discourse towards poverty reduction. It is hoped that the dialogue inspired at the award ceremony will influence decisions arrived at by Governments during the Habitat III and Post-2015 Agenda. 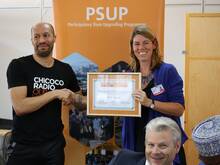 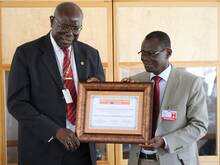