Vienna 30 July 2015-- Over 100 participants, including more than 20 mayors and other high ranking municipal and national officials, last week participated in the first Mayoral Conference on the City Prosperity Initiative held at the United Nations Office in Vienna.

In her video message, Ms. Ebtekar said: the City Prosperity Initiative is a very important initiative that looks into different issues from various perspectives: economic, social, political and also environmental… This synergy can create a lot of new opportunities that can enhance urban prosperity in both a holistic and an integrative manner”.

Additionally, Ms. Ebtekar welcomed the creation of the High Level International Board of this global initiative. Dr. Joan Clos, Executive Director of UN-Habitat welcomed the participants and congratulated them in their effort to promote south-south cooperation and knowledge sharing. Dr. Clos stressed that the CPI was an excellent tool to ensure the systematic monitoring of policies and understanding their impacts. View his speech below.

In his opening address Mr. Masoud Nosrati, President of WAIC, stressed the importance of the CPI for cities in West Asia and the Middle East. Finally, Mr. Omar Al-Rawi from the City Government of Vienna noted that much of Vienna’s international recognition as a prosperous city is due to its inclusive approach to local development.

The City Prosperity Initiative (CPI) is an innovative approach conceived by UN-Habitat to promote sustainable urban development and measures prosperity across six variables – productivity, infrastructure, quality of life, equity and social inclusion, environmental sustainability and governance and legislation. Indicators around these six dimensions and their intersection with each other establish the basis to map a city's path toward prosperity.

During this Conference, UN-Habitat and International City Leaders (ICL) launched the City Prosperity Initiative for Metropolitan Cities (CPI-MC). This partnership is supported by Shahr Bank, the City Bank from Iran.

The CPI-MC aims to promote innovative approaches to urban governance and management which will assist city leaders to guide their cities towards economically, socially, politically and environmentally prosperous urban futures.

Various city representatives and mayors expressed their interest to join the CPI; namely from Iran, Turkey and Qatar. The Province of Gangwon, Republic of Korea announced they are considering organizing a sub-regional CPI meeting and the Municipality of Tehran disclosed that an international mayoral conference on this initiative will be held in April 2016 in Tehran. 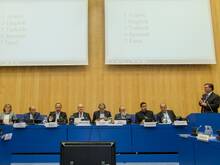