Venice 31 May 2016 — At the recently held Venice ‘Architecture Biennale 2016’ themed ‘Reporting from the Front’, UN-Habitat's Network of Urban Planning Labs facilitated an Expert Group Meeting with Urban Planning Labs from five countries: Ghana, Mexico, Myanmar, Palestine, and Philippines. The progress of planning projects in Greater Accra, Mexico City, Yangon, Gaza and Tacloban were discussed by five design teams that are funded by the Dutch Creative Industries Fund. The EGM, a collaboration between UN-Habitat and the Creative Industries, was held in the historic Ca’ Foscari University building at the Grand Canal in Venice.

Reflecting on the theme, ‘Reporting from the Front’, the EGM focused on the implementation challenges that the Urban Planning Labs face in the elaboration of their plans. At the meeting, UN-Habitat’s Executive Director, Dr. Joan Clos, clearly pointed out that the urban projects developed in the Urban Planning Labs should transcend into the political domain and stated that "In the end, urban planning is not a technical exercise only, but relies on political leadership for implementation." The EGM was attended by representatives from four countries: the Deputy Director General of Urban and Regional from the Ministry of Construction of the Union of Myanmar, Aye Aye Mynt; the Town Planning Director of Ningo Prampram, Ghana, Kofi Yeboah; the Mayor of Tacloban City in the Philippines, Alfred Romualdez; and the Head of the Urban Planning Department of Mexico City, Ernesto Betancourt.

Due to travel restrictions, representatives from Gaza could not join the EGM. During the deliberations, the country representatives reaffirmed that the Urban Planning Labs is an important approach that accelerates planning processes by bringing international and local expertise together in a participatory design process. The meeting was also attended by a delegation of representatives from the Ministry of Culture and the Ministry of External Affairs of the Netherlands. Following the country presentations, the Dutch State Architect Floris Alkemade noted that although the country contexts are very different, the challenges and the approaches to address these challenges have much in common.

It is because of these similarities that the Global Network of Urban Planning and Design Labs was established at UN-Habitat's 25th Governing Council – to develop and share globally integrated planning projects that can be implemented to address urbanization challenges such as rapid urban growth, urban regeneration and reconstruction and climate change. The planning process of the five Urban Planning Labs is being documented in a film that will be ready in the last quarter of 2016. A summary, mid-term document on the Urban Planning Labs, which was presented at the EGM, can be downloaded here. 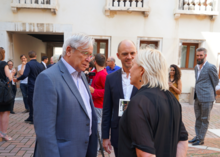