Urban planning and design at Surabaya

Surabaya 2 August 2016—Crucial bi-lateral meetings coupled with several side events were held during the just concluded Prepcom 3 meeting in Surabaya, Indonesia. Mr Raf Tuts, Coordinator of the Urban Planning and Design Branch, actively participated in three important Speakers Corners, starting with the moderation of the Speakers Corner on “The International Guidelines on Urban and Territorial Planning – A tool to Implement the New Urban Agenda” on Monday morning, followed by his participation in another Speakers Corner on “Building Partnerships through National Urban Policies for the New Urban Agenda” in the afternoon and a discussion on “Urban-Rural Linkages in support to the New Urban Agenda” on Tuesday afternoon.

The last event for the Branch and its Regional and Metropolitan Planning Unit took place on Wednesday, 27.7.2016: a high level Side Event on “Implementing the New Urban Agenda through Transformative National Urban Policies”. While Monday morning’s Speakers Corner, which was co-hosted by the Indonesian Government, focused on the International Guidelines on Urban and Territorial Planning as a global reference to guide decision makers towards improving and integrative policies, other events emphasized the roles of National Urban Policies and Urban-Rural Linkages as major tools in the process for implementation and monitoring of the New Urban Agenda.

Both, the Speakers Corner and the Side Event on NUP, were organized in collaboration with OECD. During the Speakers Corner on Monday afternoon, Mr Rolf Alter, Director for Public Governance and Territorial Development at OECD, and Mr Tuts discussed and reflected on further organizational partnerships between OECD and UN-Habitat in the preparatory process towards Habitat III, bringing up new and innovative forms of cooperation. Also supported by OECD was Wednesday’s Side Event with opening remarks by Mr Alioune Badiane, UN-Habitat’s Director of Programme Division and Mr Rudiger Ahrend, Head of the OECD Urban Policy Programme.

This Side Event, which attracted more than 80 people, was organized in collaboration with the Japanese Ministry of Land, Infrastructure, Transport and Tourism and the International Institute of Urban Management of Erasmus University Rotterdam (HIS), both presenting introductions on National Urban Policies and their influence on the implementation of the New Urban Agenda. The third introduction on the topic was presented by the Afghan Ministry of Urban Development and Housing. The introductory speakers of the event were actively supported by high ranking panel members from the Indonesian Ministry of Public Works and Housing, Cities Alliance, as well as the Hebrew University of Jerusalem.

All these events were heavily attended and the audiences participated actively with questions and remarks on the speakers’ contributions. For UN-Habitat’s Urban Planning and Design Branch the message is clear: The high interested in all the events underline the importance of the Guidelines, National Urban Policies and Urban-Rural Linkages as crucial tools towards a New Urban Agenda - that will change the world’s Urban Future and have a positive impact on people’s lives. 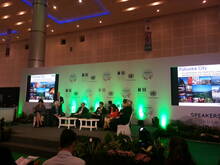