New York, 6 July 2015 – A new electronic platform allowing people from all over the world to contribute to the debates around the New Urban Agenda has been launched as part of the activities leading up to the Habitat III conference in October 2016.

“Our battle for global sustainability will be won or lost in cities,” said Dr Clos, Executive Director of UN-Habitat and Secretary-General of the Habitat III conference, in a video about the preparatory process to date. “This is a global process. Habitat III welcomes participation from all [partners].”

The Urban Dialogues is one vehicle for encouraging such global contributions. To inform the discussions, the Habitat III Secretariat has coordinated the production of issue papers around each theme which will guide discussants on the key aspects of the issue and areas of consideration for the conference.

Habitat III – the United Nations Conference on Housing and Sustainable Urban Development – will take place from 17-20 October 2016 in Quito, Ecuador. 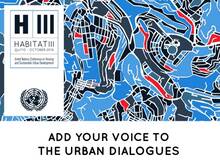