Nairobi, 20 April 2015 – UN-Habitat has launched a new web portal featuring a wealth of city data based on its extensive research into some of the most pressing urban trends of recent decades.

Launched during the 25th Governing Council, Urban Data allows users to explore data from a number of cities and regions around the world and compare indicators such as slum prevalence and city prosperity. For the first time, the data is also available for use under an open licence agreement.

The state of the art site was created by developers Zimmerman and Zimmerman who provide smart data visualisation software solutions to organisations in the development aid arena, in partnership with open data solution providers Akvo. They specialise in making data more accessible, helping development partners to become more transparent and accountable through open data publication.

It was funded by the Swedish International Development Coorperation (Sida) who are world leaders in open data and strongly support the international transparency movement.

An interactive view of our urban world

The statistics are collected through household surveys and censuses conducted by national statistics authorities and analysis is carried out by some of the world’s leading urbanists and is featured in UN-Habitat’s flagship reports like State of the World’s Cities and the Global Report on Human Settlements.

In addition, visitors to the site can use an online interactive tool to generate basic infographics that can be saved and downloaded for use in their own work or research.

The aim of the site is to give casual users a simple, quick and interactive view of urban data while also allowing academics to manipulate UN-Habitat’s rich data bank to enhance stories or new research. 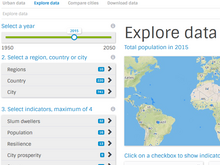