Geneva, Switzerland, 2 July 2016 - In a bid to raise financial resources aimed at tackling the slum challenge, the Up for Slum Dwellers- Transforming a Billion Lives Campaign was unveiled to the European Union countries for the first time. The campaign is an ambitious global public-private partnership being implemented through the framework of UN-Habitat’s World Urban Campaign (WUC).

“Today, 1.6 billion people do not have access to adequate shelter around the world. One billion of those live in informal settlements and about one in four people live in conditions that harm their health, safety, prosperity and opportunities,” said Mr. Alioune Badiane, the UN-Habitat Director of Programmes.

“Reducing inequalities in the urban context by integrating the people living in slums into the broader urban fabric makes our cities more prosperous and sustainable,” he added. The campaign will mobilize financial resources that will go towards the implementation of tangible initiatives such as waste management, access to water and sanitation, access roads and public spaces, lighting for community spaces and neighbourhoods and creation of job opportunities, which improve the living conditions of people living in slums. “The campaign also provides a platform for building bridges amongst communities in conflict. With the use of locally available resources and tools, slum upgrading can be a powerful tool for engagement.

We would like to offer the Geneva Peace Building Platform website to further disseminate key actions and messages that emerge,” said Dr. Achim Wennmann, the Executive Coordinator , Geneva Peace Building Platform. The campaign will also be a platform through which participating countries in the global north and south will exchange knowledge and experiences on slum upgrading. The United Nations Economic Commission for Europe( UNECE) indicates that over the last 25 years, informal settlements have become an increasingly important and urgent matter in the region.

As of 2007, an estimated 50 million people lived in informal settlements in 20 member States of the UNECE. In addition, UN-HABITAT estimates that by the year 2030, an additional 3 billion people, about 40 percent of the world’s population, will need access to adequate housing to ensure their human right to adequate housing. This translates into a demand for 96,150 new affordable and accessible units every day and 4,000 every hour. With such an enormous task ahead, urgent action is required to ensure that the number of people living in slums does not increase due to the lack of adequate housing. The achievements of the Participatory Slum Upgrading Programme, which will host the campaign we also showcased at the event.

The Programme is operational in 35 countries and 190 cities located across Africa, Caribbean and Pacific. Participating countries were supported to implement the Millennium Development Goal Targets on water, sanitation and slums. More specifically, the Programme contributed to the transformation of the living conditions for more than 268,000 people. Ten percent of funds raised were directly managed by local communities, in projects that utilize local labour and tools. In addition, inorder to prevent slum formation, more than 32 policies were developed as a way of complementing on-going upgrading initiatives.

Going forward, PSUP will support countries to implement the Sustainable Development Goal 11 and target on slum upgrading. With the adoption of the New Urban Agenda at the United Nations Conference on Housing and Sustainable Urban Development scheduled to take place in Quito, Ecuador, from 17 – 20 October 2016, Governments will further decide on the future mandate of the Progamme. 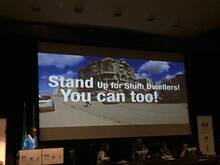