The United Nations Advisory Committee of Local Authorities (UNACLA) was established in 1999 by the Governing Council Resolution 17/18 as “an advisory body that would serve the purpose of strengthening the dialogue with local authorities from all over the world involved in the implementation of the Habitat Agenda”. UNACLA was created in the aftermath of Habitat II (1996) to materialize the special relation of local authorities as “our closest partners” as stated in the Istanbul Declaration.

The Secretariat of UNACLA is co-hosted by UN-Habitat and UCLG (United Cities and Local Governments), the major association of local governments, globally. 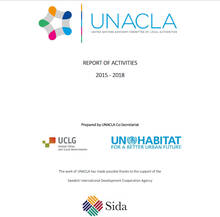