Nairobi, 2 February 2015 - Only 20 per cent of global wastewater is currently being treated, leaving low-income countries hardest hit by contaminated water supplies and disease, according to a UN report which encourages governments to see treated wastewater as a valuable resource, and a priority for the post-2015 development agenda. With urban populations estimated to double in the next four decades, and low-income countries possessing only 8 per cent of the required capacity to treat wastewater effectively, Wastewater Management, A UN-Water Analytical Brief, produced by the World Health Organization (WHO), the United Nations Environment Programme (UNEP) and UN-Habitat, on behalf of UN-Water, describes the damage being done to ecosystems and biodiversity as ‘dire’ and warns of the threat wastewater will increasingly pose to human health, economic activity, and water security if left unaddressed. The report argues that wastewater management has been neglected in the rush to commercialize drinking water production, a situation exacerbated by a fragmented water management system in many countries, and the use of different technologies that are often designed separately and retrofitted to existing systems.

UN-Habitat Executive Director Dr. Joan Clos said, “To be successful and sustainable, wastewater management must be an integral part of the critical levers of urban planning and legislation resulting in productive, healthy and livable cities. The upcoming UN Conference on Housing and Sustainable Urban Development, Habitat III, will be an opportunity to underscore the importance of effective wastewater management and highlight the role of wastewater in the new urban agenda.” The Chair of UN-Water, Michel Jarraud said, “Wastewater has featured heavily in the discussions on the Post-2015 Development Agenda. Countries have recognized that economic and sustainable development must incorporate water resources, wastewater and water quality.

This publication contributes to the ongoing discussions and will hopefully serve to inform policymakers.” UN Under-Secretary-General and UNEP Executive Director Achim Steiner said, “Wastewater management has been neglected in the rush to commercialize drinking water production, a situation exacerbated by a fragmented water management system in many countries, and the use of different technologies that are often designed separately and retrofitted to existing systems." "Around 70 per cent of industrial discharge in developing countries goes untreated. And eutrophication – from wastewater and agricultural run-off – has, according to recent estimates, reduced biodiversity in rivers, lakes and wetlands by about one-third globally.” “It is time to turn this environmental and human health challenge into an opportunity. Agriculture consumes 70 per cent of global water withdrawal, but agricultural irrigation from reclaimed wastewater is on the rise, and is being used to irrigate 20 to 45 million hectares worldwide. This is just a fraction of what is possible if policy and available technologies converge to ensure that wastewater and water quality are fully integrated into a more holistic water agenda as part of the post-2015 process,” he added.

Role of the Health Sector in Coordinating and Guiding Efforts Highlighted

Dr. Maria Neira, WHO Director of Public Health, Environmental and Social Determinants of Health, highlighted how informal and unsafe use of wastewater can jeopardize the health of farmers, local communities and consumers. With increasing water scarcity, sound health-based risk management needs to be progressively applied to safeguard health while increasing agricultural productivity. The health sector has an important role to play in coordinating and guiding efforts. Africa is heavily impacted by the problem of untreated wastewater. Of the thousands of people that die each day of preventable water and sanitation diseases, a significant number are from Africa.

According to the 2014 Africa Water and Sanitation Report, more than 547 million Africans lack access to basic sanitation, a situation that, due to illness, premature deaths and school absenteeism is costing the continent billions annually in lost Gross Domestic Product (GDP), including US$ 347 million in Kenya alone - or 0.9 per cent of GDP, according to the Economics of Sanitation Initiative.

The UN report provides many examples of low-tech, low-cost, on-site solutions that are now available in low-income countries where infrastructure to support centralized water treatment systems is lacking. For example, in 2010, in Africa’s largest slum settlement in Kibera, Nairobi, a personal, single-use, self-sanitizing biodegradable toilet was introduced. The product is now being used daily by 2,000 people living in Kibera, as well as 18,000 students who have access to it through a special school programme. The product breaks down urine and faeces to form ammonia which inactivates microorganisms.

The used bag is odour free for at least 24 hours and the contents are fully sanitized after only four weeks. The bags are sold to the community via kiosks and local entrepreneurs and returned to drop-in points by female micro-entrepreneurs where a part-refund is provided per bag. The fertilizer used in direct form - with the toilet bags buried in the ground and crops grown alongside - has been shown to be very effective. Innovations like this one - previously only used in humanitarian crises - exemplify the scale of the worsening crisis in informal settlements where wastewater infrastructure is often non-existent.

The Rapid Assessment Report on Wastewater Management (Sick Water), co-authored by UN-Habitat and UNEP, notes that 21 of the world’s 33 megacities are on the coast, placing fragile ecosystems at risk. And without urgent action to better manage wastewater, the situation is likely to get worse. UN-Habitat contends that effective urban planning, legislation and financing lie at the core of addressing the wastewater challenge. As countries prepare to finalize the next development agenda, which includes a proposed goal to ensure sustainable water and sanitation for all, it is hoped that the report will serve as strong evidence that treated wastewater can have an important role to play in social, environmental and economic development. 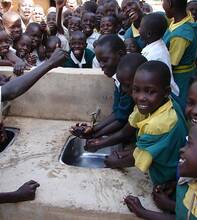 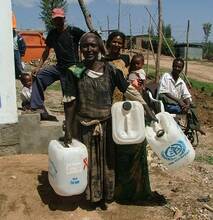