COLOMBO,  December 2018 -  UN-Habitat in partnership with the Government of Sri Lanka, launched the State of Sri Lankan Cities - 2018 report, the first ever comprehensive analysis of the country’s nine provincial capital cities, at a national event at the Bandaranaike Center for International Studies.

The report highlights overall trends in the urban development, presents key data and recommends a way forward for policy makers. The report found that Sri Lanka’s provincial capitals are larger and growing at a faster rate than previously thought as well as the important role cities play in driving social and economic development.

There are several key policy recommendations including redefining what is considered an ‘urban’ area and revising municipal boundaries to incorporate large fringe areas that are not currently counted as ‘urban’ in official data. This will ensure that the scale of Sri Lanka’s urbanization is captured in official statistics and represented in policy and planning. Other recommendations include developing a national and sub-national sustainable urban strategy,

Work on the report has been ongoing since March 2017, by UN-Habitat along with the Ministry of Provincial Councils, Local Government and Sports, through the Sri Lanka Institute of Local Governance and the Local Authorities of the nine Provincial Capitals.

UN-Habitat Country Programme Manager, Dr. Chanaka Talpahewa stated “This report is a significant step in helping improve the understanding of our cities. It will assist policy makers and planners to identify critical projects and policies that can be implemented to help Sri Lanka to grow as a nation.” 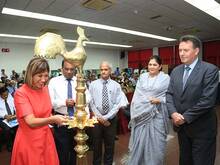