UN-Habitat to partner with Cape Verde for sustainable communities

Praia 27 January 2017—UN-Habitat is keen to work together with the government of Cape Verde to build stronger communities, the Director of the Regional Office for Africa, Oyebanji Oyelaran-Oyeyinka has said. The director visited Cape Verde to discuss with Central and local Government authorities on the implementation of the New Urban Agenda in the country and to identify the priority areas of cooperation for the coming years.

From meetings with the Prime Minister of Cabo Verde, Ulisses Correia e Silva, a roadmap for the elaboration of an urbanization program for the country was discussed, with five main components concerning the elaboration of a national urban policy; Improvement of informal settlements, urban resilience and capacity building; Implementation of the city prosperity index and finally the urban citizenship campaigns component.

"I am very happy to see Cape Verde's great commitment to urban development, which I am sure is an example to be followed even by the most developed states," said Mr. Banji when he met the Minister of Foreign Affairs, Mr. Luis Filipe Tavares, and the Minister of Infrastructures, Spatial Planning and Housing, Ms. Eunice Silva Lopes.

The cooperation that started in 2009 was assessed to be very positive with encouraging results and the authorities concluded that this is a moment of change since all the basic conditions were established and that new investments should be jointly mobilized for the common agenda of the organization's intervention in Cape Verde. During his stay, the Regional Director met with the Mayor of Praia, Mr. Oscar Santos, and reinforced the dialogue on the partnership for the improvement of informal settlements with regard to actions to requalification and improve the urban environment of the Praia city.

A guided city tour was organized by the Municipality of Praia staff to the main informal settlements of the city in order to be able to draw up some strategies of joint intervention. The Regional Director also went on a mission accompanied by the Minister of Infrastructures, Spatial Planning and Housing to the islands of Sal and Boa Vista to hold working meetings with the Mayor of Sal Mr. Julio Lopes da Boa Vista and the Mayor of Boa Vista Mr. José Luis Santos. The meetings strengthened the dialogue on the participatory improvement of the informal settlements of the respective islands. Mr. Banji also made contacts with local institutions such as the Society of Touristic Development of the islands of Boa Vista and Maio and also a guided visit to the Local Project Cadaster financed by the MCA Programme.

On the island of Boa Vista in particular the mission was accompanied by the Resident Coordinator of the United Nations System in Cape Verde, Ms. Ulrika Richardson. The members of the official mission together with their respective Mayors and their technical teams went on field visits to the informal settlements of the two islands, which allowed careful observation of the situation and outlined some strategies for future joint intervention in the framework of the Participatory Slum Upgrade Programme. 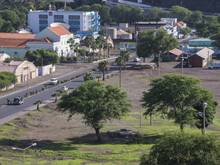