It reviewed a number of consultations with municipal and private stakeholders in Stockholm such as the Swedish Government, the City of Stockholm, SKL International, White Architect and Jerhusen, Mr. Stefan Noreén, Senior Advisor to the Minister for Enterprise and Innovation, and the Swedish Transport Administration.

Full participation and commitment to reviewing public transportation and redevelopment in Stockholm resulted in a productive and unprecedented study mission. Representing the delegation, KRC Chairman General (Rtd) Jeremiah Kianga expressed his appreciation to UN-Habitat for a successful and beneficial tour and “expected faster progress on project implementation thanks to the trip”.

In addition, as a result of the active support of the Embassy of the Republic of Kenya in Sweden and the collaborative efforts of UN-Habitat, Dr. Joe Sang, Kenyan Ambassador to the Nordic Countries expressed his highest consideration and esteem for what was an “extremely well organized study mission which resulted to a fruitful visit for the Governor of Nairobi, Dr. Kidero and his delegation”.

The scope of the Nairobi project extends much further with regards to integrating transportation systems in the CBD to ensure that there is fluidity across all transportation centres and networks, and that the city in the grand scheme of things not only grows economically but aligns itself as a regional transportation hub. Nairobi residents spend 3-4 hours each day commuting to work and back home.

The frustration of traffic jams and congestion are an additional feature of Nairobi’s city life. Due to these concerns, stakeholders are all exploring ways to improve these urban challenges and Plans by the Railway City Development Project to revitalize a 200 acre parcel of land adjoining the Nairobi Central Railway Station Area into a Mega City is the most ambitious yet.

With growing global interest to enhance the fiscal sustainability of this prime piece of real estate including the construction of state of the art hotels, international golf courses and commercial centres, this on-going flagship Railway City Development Project holds a great promise to re-awaken Nairobi. 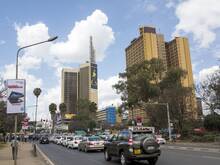