Nairobi, 13 April 2015— Important international debate around sustainable urban development got underway on Monday as UN-Habitat prepared to hold the second preparatory meeting of the Habitat III conference as well as the 25th session of the Governing Council.

On his part, Mr. Matiang’i assured those present of Kenya government’s commitment to supporting the two meetings. “We recognize that Kenya is urbanizing very rapidly…What the people in Nairobi are seeing now [such as recent changes to traffic rules in the city centre] are part of this government’s long-term plans to improve the livelihoods of people in Kenya,” he said.

Speaking during a question and answer sessions with the media, Dr. Clos said that the world needs to embrace the new thinking that sees urbanisation as an engine of development. The Executive Director said that the global financial crisis of 2008 had forced a paradigm shift in the priorities of many development partners.

“There will definitely be changes in funding because after that crisis there have been changes in priorities,” he said. “But urbanization creates value and what we need to do is work out how to share that value most efficiently to the benefit of all.” Talking specifically about Kenya, Mr. Matiang’i said that his government was keen on the slum upgrading programme originally started in conjunction with UN-Habitat.

“After what we have done in the Kibera slums of Nairobi, we will soon replicate it in three or four other informal settlements in the city before rolling it out in other towns,” he said. 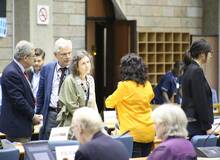