Nairobi, 5 August 2015-- UN-Habitat has published a Training Pack on housing the poor in Africa. The pack is a resourceful training companion that is made available on-line for download from UN-Habitat website.  Training and Capacity Building organizations and other learning institutions can use the Training Pack to train policy makers and housing practitioners from the public, private and community sectors. It consists of a Facilitator’s Guide, PowerPoint presentations and videos.

The training pack was drawn from Quick Guides Series for Policy Makers on Housing the Poor in African Cities which has been produced by UN-Habitat with the financial support from the Cities Alliance. The purpose of the Series is to give policy makers quick information and easy-to-use tools to support decisions that benefit the urban poor in cities of Africa.

The training pack was tested at a training of trainers’ workshop for African training institutions in September 2014, and at two workshops for Namibian policymakers in Namibia in March and May 2015. Over 60 policy makers were trained in Namibia in cooperation with Namibian Association of Local Authority Officers (NALAO), the Polytechnic University of Namibia, the Shack Dwellers Federation of Namibia (SDFN) and the Namibia Housing Action Group (NHAG).  The French version of the training pack will be available later this year. 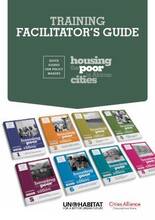