Paris, 15 Dec 2015 – UN-Habitat on Tuesday, 08 December, hosted a ‘One UN solutions for cites & climate change: the new climate agreement & the new urban agenda’ event at the United Nations Climate Change Conference - COP21. The session convened representatives of cities, academia, the private sector, national governments and the UN family for a lively panel discussion to establish a solid connection between the new Climate Agreement and the New Urban Agenda; to discuss and raise awareness of the various challenges, opportunities and solutions related to cities and climate change; and to present and discuss the UN system’s solutions and input in the field of cities and climate change that can enrich the new urban agenda.

The session was moderated by Raf Tuts, Coordinator, Urban Planning and Design Branch at UN-Habitat with opening remarks given by Ambassador Maria Espinosa Garces of Ecuador. Ambassador Garces highlighted the importance of such events in paving the way for a successful Habitat III in Quito, Ecuador in 2016. The Ambassador further elaborated that the key issues is to build low-carbon cities while also combating poverty and exclusion’ and that Sustainable Development Goal 11 and sustainable urban development should be key issues for Habitat III and the new urban agenda.

Following, Mr. Tuts introduced the first round of panellists representing different UN agencies. Christian Friis Bach, Executive Secretary & Undersecretary General of UNECE commented that the European region is drastically urbanized with 3 out of 4 people living in urban areas, and there is a need for tools and the development of indicators to test smart cities that are being sought. Pradeep Monga, Director General and Special Representative on Energy and Climate at UNIDO communicated the efforts to create climate resilient industries, and green supply chains, while also creating jobs.

Focus on contributions of Urbanization to development

Malcom Johnson, Deputy Secretary of ITU stated that ICT offers a potential of 20 per cent Green House Gas(GHG) emissions reductions by 2030. Further ITU set up a focus group on sustainable cities that is developing international standards. The first panel was closed by Dr. Joan Clos, Executive Director of UN-Habitat and Karla Slechtova, Minister of Regional Development, Czech Republic. Dr Clos talked of the need to shift conversation from the negatives of urbanization to the contributions of urbanization to development.

This shift can influence policies that will convert urbanization to a tool to accelerate development. Dr. Clos argued that issue lies in the perception of urbanization as a cost as opposed to an investment. He finished his intervention commenting that what is needed is to look at what value urbanization creates, who captures the value, and how best to reinvest the captured value of urbanization. Following Dr. Clos, Minister Slechtova commented on the opportunity for the European Habitat III in Prague, to launch the Prague declaration that would feed into the New Urban Agenda at Habitat III in Quito.

The Minister highlighted the role of the state to offer a legislative basis to support urbanization and assist local authorities and commented on the need for cooperation between national and local governments and business. The second round of panel discussion began with Mr. Luis Neves of Deutsche Telekom who discussed the need for a good regulatory environment to achieve both GHG reduction and economic value in cities. The discussion was continued by Professor Eugenie Birch who talked of the deficit of knowledge with regards to urbanization and the need for more data. Her intervention ended with a call for the establishment of an IPCC type body, an intergovernmental panel of sustainable urbanization to commence pooling together various knowledge on urbanization.

Lord Mayor Ulrich Sumpthon of Port Vila described the current impact of urbanization and climate, and both identified recent efforts undergone with the help of various organization and reiterated his municipality’s need for further assistance to build resilience. David Jackson of UNCDF stated that the world has reached peak urban; the rate of urbanization has surpassed the rate of population growth in absolute terms. However, growth will occur primarily in secondary cities. Mr. Jackson spoke of the need for mechanisms to meet financing and revenue mobilization needed in secondary cities. He further highlighted five different mechanisms to attract long term finance instruments. Kadri Nassiep closed the final panel highlighting the need for informed municipalities and informed consumers stating smart grid need smart consumers. Monika Zimmermann of ICLEI summarized the session and provided final thoughts. 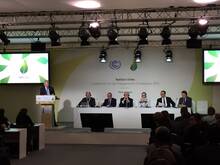 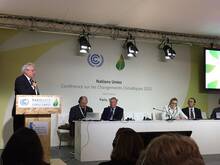 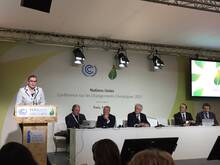